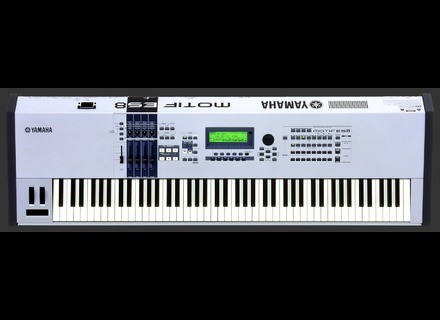 MOTIF ES8, Workstation from Yamaha in the MOTIF series.

View other reviews for this product:
Motif ES 8, 88 keys, all controllers can imagine, among the sampling in Stereo, MIDI IN OUT THROUGH finally what all!
Sounds, styles, effects?!? I have not had time to see everything so there are, you drown in it! Contents in the edition there is "almost" everything! missing (may be I have not found in this case the thousand pardons for the reader) an editor for the performance but it does not prevent to work even when, Arf.
its polyphony? Wouafff is unique upgradeable 128 channels is from HELL!!

Ok, its use is similar departing from any default made by Yamaha CATEGORY 3 trs ptits stuff is intuitive! For editing, I advise all users to use editing software on computer, otherwise I fear it is a little complicated! That said, I recently and work without the editor is not as bad as some!
To see marququot; Empoli Manual "instead of" Operating Manual, and then I started m'inquiter ...
Recipe (do only at home): put in a garbage can, a few well-chosen pieces of paper with love and care, take a match and the crack! Then throw in the match ignites in the trash and make sure what that fire take it! When the latter is temperature of cruise, you can put your dear hand because it really explains very little (well, j'exagre a bit, but I really had a lot clearer in Mati re man! does not matter!

Sounds?!? Ehben put on by Emu, Kurzweil and again, I rarely felt as much dynamic sound! I warn right away, the possibilities are ... I have no words for résumé but what I feel, this thing is a killer!
Let's be clear, all is not gnial Contents in sound, such as ensembles of violins always picks but only little ....
From the little I could listen effect is nickel, j'tais Paris with a friend some time ago, to test the machine with another friend Quei came to receive it, I can say that a while, we got CARREMENT suprendre by reverbs so they are full, the admit, I was not expecting it and to say "hat" is too good effects!
Correct answer in the expression of many sounds, a change of some machine Yamaha o everything had to reschedule for something!
In any case the sounds are (almost) perfect! I have my weak especially for the drum kit and a lot of synth sounds and the flutes, which IMHO, will now surpassed only by the flute itself or the NAV at worst ...

I work as a tar on it recently and I must say that before this machine, I did almost the hardware, I am now forced to reconsider my position on this thing!
My only regret, and in fact the machine which stretched the possibilities of sampling is 512 mb ... empty book! Not even 4 mgas for fun! Too bad!
I think for less than 3000, you can go, it's clear that the machine should be upgrade but the key is that your bf and then good will and your ladies and gentlemen purse of course!
A remake that choice ........... YES!
See the source
Did you find this review helpful?yesno
Cookies help us improve performance, enhance user experience and deliver our services. By using our services, you agree to our use of cookies. Find out more.