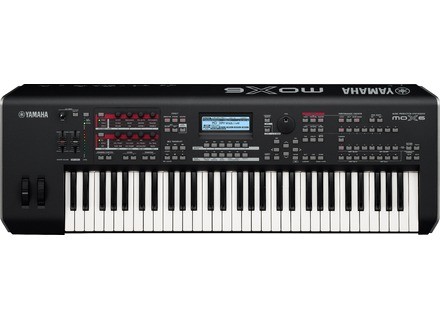 Value For Money : Poor Audience: Anyone
View other reviews for this product:
I believe that this review also applies to the newer Yamaha MOXF6.

I bought the MOX6 many years ago, way back in 2013, just before stores had stock of the MOXF6 which was to replace the MOX6.

Now in 2020, I thought that it was time to sell my MOX6 but I noticed that some people were talking online about bad A/D and D/A converters which might be the cause of the bad sound quality.

I managed to get the schematic of the MOX6 and I noticed that Yamaha are using a Cirrus Logic WM8740 DAC chip. This chip is used in high quality DAC gear so I don't think it's the chip.

The first sound file "Song 1 Through Main Outs" is Song 1: Club WorX played through the main outputs of the MOX6.

So I think that the sound in the second file would be what you would hear on the Motif XS, though I cannot confirm this because I don't have one.

The sound in the first file had to pass through the WM8740 DAC chip and associated output circuitry, but not the USB Audio chip.

It is clear that if you just plug in speakers or headphones into the MOX6, what you will hear is absolute crap. But it might pass in a lively disco party.

If you want to hear quality sounds, you have to use a computer and use USB Audio drivers to listen to it. I believe for the MOXF6, you can use an iPad or iPhone with the Camera Connection Kit but I don't think you can with the MOX6.

What is Yamaha trying to do? Are they trying to make you think that the MOX6 is crap so you have to buy a Motif to get the quality sounds?