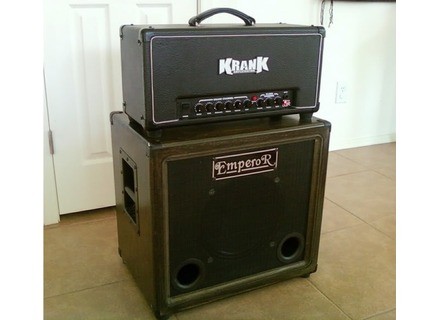 First, let me start off by saying - What a great design! These cabs are built flawlessly to a very high standard in Chicago, IL. This is, without a doubt, the best sounding 1x12 I've ever heard.

I had paired this with a Jet City JCA20H and they were a perfect match. Plugging the JCA into my Mesa 4x12 resulted in flubby bass and an overall fizzy and gross sound. For the first few weeks I had the amp, I didn't like it at all - Once I got the Emperor, I completely fell in love. The Emperor sounded BIGGER than the Mesa 4x12, with a much tighter bass response, not to mention it added an aggressiveness to the JCA that wasn't present at all with the Mesa cab.

This cabinet is fairly big for a 1x12, due to its over-sized design (for more bass response), width-wise, it's nearly the same size as my Soldano 2x12, depth wise, it's deeper by 2 inches. Since Emperor uses some pretty big cuts of birch, it's not exactly the lightest, but still easily moved. Really, my only complaint with the cabinet, is since Emperor doesn't use tolex on their cabs, they are easily dented. Not a big deal though if you take care of your gear.

Since buying this cabinet and falling in love with it, I sold my Mesa 4x12 and replaced it with an Emperor 4x12 that just sounds massive! Unfortunately, I no longer have the 1x12 cab (or the JCA head), but I only got rid of it because of the 4x12 and not having much need for a smaller stack.

Overall, I would (and do!) recommend these cabs to anyone. They are among the best cabs being made today and if an opportunity ever arises to buy one for a good price (or even if you're ordering new), I would definitely jump on it!
Did you find this review helpful?yesno
Cookies help us improve performance, enhance user experience and deliver our services. By using our services, you agree to our use of cookies. Find out more.