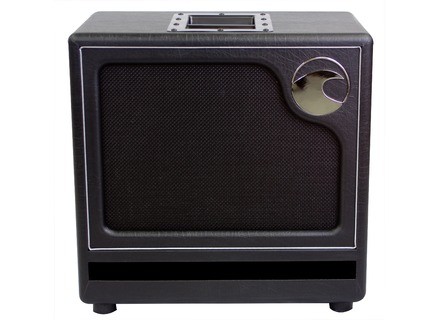 I purchased this 1x12 cab right when Port City was just getting their name out. It's actually a discontinued model. It's their 1x12 cab, but it isn't the 'oversized' model. I guess the OS model was selling a lot better, so they decided to discontinue the 'standard' size. Port City makes their stuff in NC, my home state. So, there is a little home state pride in my ownership.

This is a very very well made cab. It reminds me a lot of how Boogie cabs are constructed as far as quality. Just top notch all around. There is also a recessed metal handle on top, and that is super convenient. The only thing that's somewhat off-putting, is the aesthetics of the speaker grill. The cab looks very vintage; almost 50's retro-esque. Now that's not automatically a bad thing, but it is kinda quirky.

Anyway, I really love this cab. The whole design philosophy behind these cabs was to make a 1x12 cab sound like a 2x12 cab. There is a thin rectangular slit at the bottom of the cab underneath the speaker. Since speakers emit sound from the back (as wells the front), this allows that extra sound to bounce around in the cab (via a special internal structure), and come out the front via the little slit. Unlike what the name might imply, it isn't a 'port'.

Does it work? Yeah, as far as I can tell. I mean, it sounds a lot bigger than a 1x12, so it must be doing something right. It works great for small shows, for recording, for anything really. The only ingredient you must figure out is speaker choice. I use a Eminence Swamp Thang in mine.

Overall, this is a killer cab. I never plan on selling mine ever. It's just super convenient to have around, and it works well for any sound! Well, except if you need a 4x12, but it isn't too far off. Believe me.
Did you find this review helpful?yesno
Cookies help us improve performance, enhance user experience and deliver our services. By using our services, you agree to our use of cookies. Find out more.