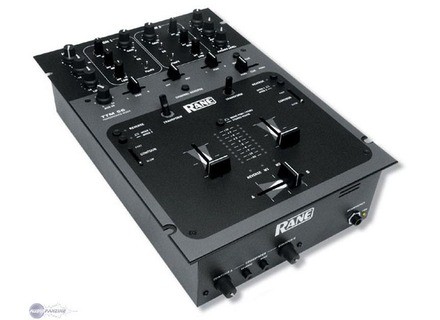 TTM 56, 2-Channel Mixer from Rane in the TTM series.

View other reviews for this product:
The Rane TTM56 is a 2-channel mixer 9 "3 magntiques faders, each channel is fitted with phono / line, a 3-band qualiseur dbraillable, an FX, and r tings of curves.

On each fader can be rgler velocity curve with a fader "Contour", the faster the "Cut in time" is the same as that of the crossfader, ideal for scratching two on the same mixer.
The faders can also be a possdent inverss and "Mode 2" to say the least original, because in this position the fader will control over the volume, but the pan: no sound in the center, above the his left, and down his right.
Cf: Here (http://www.rane.com/faderesp.gif).

The crossfader possde also an inverter and two "Contour", one for each channel, we can have a rglage "dry" for a cot and a progressive on the other (eg), the " Mode 2 "as it allows to have one and only one plate each of the Crossfader cot and no sound in the middle.
Cf: Here (http://www.rane.com/crosresp.gif).

The channels are reversed, but unlike a Vestax 07Pro (eg), only the faders are inverss, it will therefore reverse the crossfader to have the same connections, the power trim / Eq / Fx is not reversed more it remains the same regardless of the rglage.

The effects loop is composed of a dpart Stereo and a return, the amount effect in the mix is ​​a gre Fader "Dry / Wet" when one takes only the "Wet" signal "Dry" is shot and the effects can be in Send (ex: Reverb, Delay) or Insert (Comp, Disto).
Nb: The effect is dpart POST Trim / EQ / Fader / Crossfader.

In the more traditional functions, there is a microphone input jack with Insert (for Gate / Comp for example), a monitor output / Headphone switchable Cue / Master, two master outputs (RCA jacks and symtriques), and INTERESTED thing of VU meters with switchable PFL / Master.
Nb: The prampli headphone is one of the most powerful, Sennheiser HD270 on over 4 volume is unbearable

The "Scratch Sessions" are allowed since the TTM56 has an AUX IN and Out In Out Cable for the amp and the table of collgue.

At the physical level, the knobs (Trim, EQ, Master, etc.) and the faders (Pan, Dry / Wet, Cue) seem trssrieux / solid, it&#39;s the same for UpFaders and the crossfader.

The "Faceplate" is a Contents which is reminiscent of "cot plastic" and "Butter Rugs" (fawn tflon), so it does not get dirty like a Technics SHxx-1200 (eg) and do not mock a Vestax (eg), since the srigraphie is in plastic, use it always remains like new.

Despite its advanced functions, the rest TTM56 a mixer like the others, then you plug and play.

This mixer has Turntablism t Designed for the "Channel Reverse" (eg) had to be pens for the Euro Scratch (among others) since only the faders are inverss, the consideration is that it is impossible to make "the low Plus One" since the EQ not reversed, the EQ Switch On / Off can be used to level ...

Obviously something else "impossible" on the mixer: the EQ Drumming, as it ncessite of EQ fader (eg 07Pro Vestax, Stanton SA-5/12), and here are the EQ knobs.

Everything else is absolute happiness, pass the time to adapt to (Cross) faders, indeed faders magntique trs are individuals:

_ They are lgrement shorter (40mm instead of 45mm)
_ They are flexible but trs trs without any bounce or touch heavy
_ They are "adjustable" in hardness via a spring fix on each "slide" of faders,
_ They make no noise contacts against the plate, it can be Gnant for those with the "Clicks" with the sound mtallique (See Vestax / Numark / Stanton for example), but in the end it trs enjoyable.

For Scratch and Beat Juggling the crossfader is a rgal, for me the best, as the publicity says: "The crossfader knows exactly what your hand is," and it&#39;s true

The "Mode 2" of UpFaders can scratch effects by panning at the same time, provided s&#39;avoir scratch with a finger (Tony Vegas Style).

The effects loop is very practical to indulge in the Scratch Music "Live" with a Boss RC-20, Ambiloop, Live, Sonar, etc. or for any type of expression: a Vocoder Beat with a "never ending" scratches with delay (fun), scratches with reverb (fun too), scratches with fast tremolo to "simulate a Vestax 07Pro D"

The sound of this mixer is transparent, without a breath or distortion, and the quality of phono pramplis is excellent.

The EQ trs are effective because they can cut their compltement range frequency drives, and with at least 3 EQ, there is no sound, this is closer to the EQ switch on / off to imagine the kind of fantasies that can be done with.

I did not blame this table is what I&#39;ve seen better up Submitted the cart price is quickly forgotten seen the strength and quality of all .

I test some prt everything is done in "Battle Mixers," and it seems to be the very best, some even prtendent Scratch that one better with, and I am quite agree.

Conclusion: Try the and you may be like me, the "Thunderbolt".
See the source
Did you find this review helpful?yesno
Cookies help us improve performance, enhance user experience and deliver our services. By using our services, you agree to our use of cookies. Find out more.