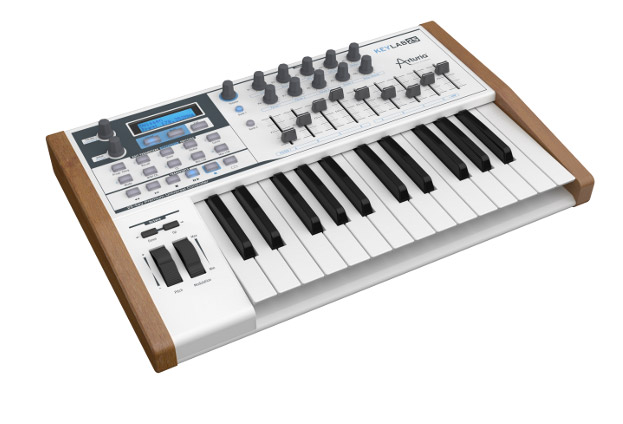 25-Key MIDI Keyboard from Arturia belonging to the KeyLab series.

Publié le 04/23/14 à 23:25
I wanted to take this keyboard is the perfect complement BeatStep. I use it as a sequencer and therefore Keylab was perfect with 25 faders and Knobs. I wanted a keyboard WITHOUT pads not duplicate.
10 Faders 10 Knobs, plenty to do and the transport keys prevents me from taking a third controllers.

This is my first keyboard, so it is difficult to compare, but I find it pleasant, 25-key enough, I find it easy to take in hand, the manual is clear.
We can do better on the solid feel of knobs and faders. We'll see over time if it holds. buttons are made of rigid plastic with a dry click and franc. I would have preferred more flexible that would have been nice touches, but hey nothing serious.
The software provided with (AnalogLab) was not very stable air, he planted two times already in 3 uses. by the bank against its top is, yen for everyone.
MIDI Control Center is not the point either, after updating the firmware it loses the connection, and many on the net are complaining because they can not even update.

I use it for 2 weeks (very little)

firstly when I bought the Keylab cardboard was closed with a single piece of tape (the original tape was cut), plastic USB cable was already torn, and had black marks keyboard key that did not leave.

After test there was really a bug. He gave me a standard exchange and was therefore tested directly at the store to see if it worked. We had to go out every Keylab25 stock.
5 in stock 4 KeyLab25 had keys (keyboard) that were defective, they were not aligned. one was higher than the other, never the same. and under this key defective a small piece of plastic (black) was broken.
Noted that all the boxes were already opened too, my salesman told me that he had received all like that. I do not know if this is the wholesaler or Arturia, but it is abused.

So big downside for Arturia, which in really had a big quality problems (because the net I've also seen bad reviews).

So I put means because of my journey to succeed to have a properly working keyboard and also for the software part that is not successful in my opinion. Despite all the keyboard is nice. Must be lucky and getting the right.
Assuredly I do not redeem Arturia so soon
00