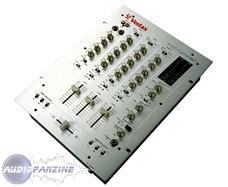 3-Channel Mixer from Vestax belonging to the PCV series.

View other reviews for this product:
FP User
Publié le 10/31/08 à 16:00
This is not a 'scratch' mixer but the fader is incredibly loose. It feels like a real scratch mixer, and also has awesome features for mixing like kill switches. it also has effects loops which i probably will never use but i know they are there if i need an fx unit and has three channel, three band eq.

It took me a little while to get all the plugs in the right slots, it is kind of deceiving how to set up a two turntable set up.

Sound quality is awesome, it is focused on mixing but is also awesome for scratching. the eq's are awesome and so are the kill swtiches.

The buttons are all metal and the mixer is built of solid steel.

this mixer is awesome and i will have it for a long,long time.