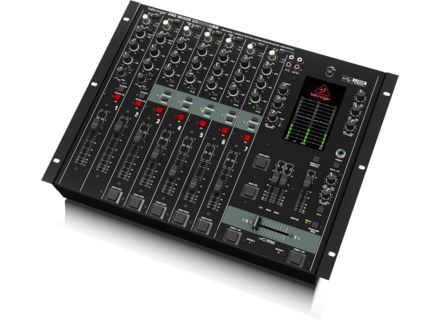 DX2000USB, 4+ Channel Mixer from Behringer in the Pro Mixer series.

Buy this productView price information >
View other reviews for this product:
The Behringer DX2000USB mixer has 7 channels and it has very good audio outputs. This mixer is great for just about anything. It does not just have to be used for a DJ or club. It is also great to use for events and other similar activities. It has a built in USB interface, and 5 stereo inputs. This unit does have phantom power in case the user may need it. It also comes with some software like audacity which is already free anyways so it really does not make a difference. It also comes with podcasting software, but that is free too.

Setting this mixer up is simple, but it can be a little overwhelming at first because it is a rather large mixer with a lot of inputs and outputs and functions to control. You will need to read through the manual in order to fully understand it unless you have worked with a unit this size before.

The build of this mixer is very good, it is solid and heavy. It is not meant to be portable but it is mean to sit in a rack. It will take up three rack spaces which is ok for units of this size with this many features. The DX2000USb has a 3 band EQ and gain knob per each channel. There is also talk over functions that let you control the sensitivity and damping.

I love everything about this mixer and it will be around for a long time. It works with any computer and does not need to set up any type of drivers or anything because it works right through the USB mode like any other device would. We left it racked in one of the clubs we use to be in a lot and then we could each just plug our computers up to it as we came and that away it could be used by anyone without compatibility issues arising.
Did you find this review helpful?yesno