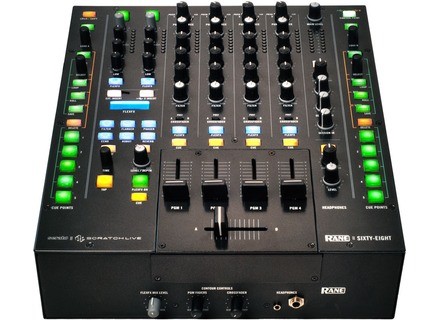 Sixty-Eight, 4+ Channel Mixer from Rane in the Sixty series.

The new Rane Sixty-Eight DJ mixer will be shipped week 2 or 3 in April - but not to the Netherlands due to some pattent problems.

Here is what the company declared:

'The Sixty-Eight won't ship until mid-April. We won't be able to ship this model to the Netherlands due to the same patent issue that prevents us from selling the other Scratch Live models,' according to Dean Standing, Director of Sales from Rane/Serato.

The Sixty-Eight is a professional DJ mixer with two USB 2.0 High Speed ports with support for real-time connection of two computers. Two DJs can work in parallel and/or transition from one DJ to another.