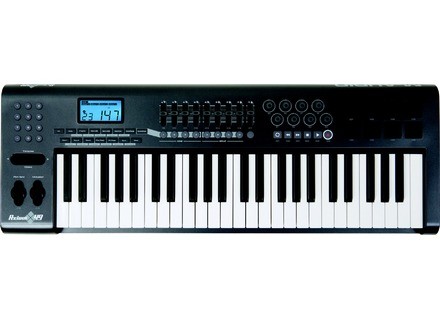 Axiom 49, 49-Key MIDI Keyboard from M-Audio in the Axiom series.

View other reviews for this product:
The M audio axiom 49 is a great keyboard for your midi production system. With enough knobs and sliders to program to all of your functions that you program has. I have used this will Logic and fl studio and had no problem doing so.

I like being able to mute, solo, play, stop, rewind, forward, and record without ever touching the mouse and the fact that pressing stop twice brings the marker to the beginning of the session or loop point. The new keybed is also nice too. It's not as stiff as the first Axiom controllers. It kinda has this extremely light piano feel but yet the keys aren't so heavy where you'll still feel comfortable whether you're playing pianos, synth, or expressive drum parts. The pads are cool as well. Even though M-Audio could make em' a tad bit "fatter" like MPC style pads, they still feel good when i'm doing drums from Ultrabeat or my own personal sounds in the EXS24. The only thing I have against it is that when you're "slam-dancin" on the pads to much, they tend to blank out a little but it dosen't happen that often. Not to mention i'm sure that M-Audio will work out the minor bugs in future versions of the OS. Above all else it's a great feeling controller and my next move will probably be the 61 key version when I install Logic on my new MacBook Pro. I recommend it for flawless workflow in sequencing or recording on Logic, or anything else for that matter. New buyers don't forget to download the HyperControl protocol for whatever software you're using from m-audio.com

Overall its great, it comes in the 49 and a few other versions, I must say the feel of it is great. Like I said before the keys arent too heavy so you can still play your leads on it well. But when you first get it if you buy it brand new the keys will be kinda stiff. But they will loosin right up for you after a few uses.