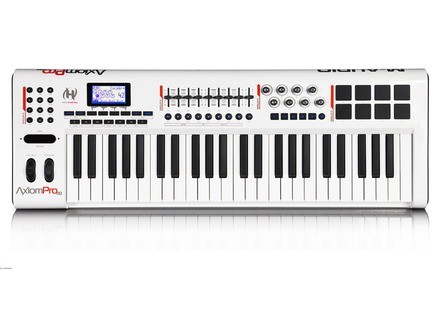 It used to be black and now it's white. M-Audio's controller keyboard is back with a new look and on steroids...

The first thing you'll notice as soon as you unpack the Axiom Pro is that it looks different compared to the standard Axiom. No black and gray sleek finish anymore, instead you now have a shiny white finish to emphasize the black controls with red and gray labeling. The color combination gives it an iPod Classic, 80's revival look–it even has a chrome detail on the top of the encoders. Some might find it a bit too fancy but the contrast of colors will surely make it easier to use in dark environments, compared to the standard Axiom, be it on stage or in the badly-lit cellar you call home studio. M-Audio also used the occasion to add nice blue LEDs to 19 buttons and the keyboard's LCD display.

No big changes on the front panel... nor the rear: on/off switch, PSU connector, USB port (so you can power it via USB), MIDI input and output with 5-pin DIN connectors, and two 1/4" jacks for sustain and expression pedals (not included). Nothing's new under the sun. The real innovation is found on the most important element of any keyboard: the keyboard itself.

Thanks to the new TruTouch proprietary technology, the Axiom Pro provides a much more convincing playing feel than the Axiom. Even though the keys are still only semi-weighted keys with aftertouch, the keyboard feels heavier under your fingers and less cheap than its predecessor. Nice!  When it comes to MIDI, the keyboard works fine with a sequencer: velocity and aftertouch values match the velocity curve you set on the keyboard. On the other hand, we are less enthusiastic about the pads, whose response is not consistent throughout the whole surface. When you hit the side of the pad you record a much lower velocity than if you hit the center. In short, you'll have to hit precisely in the center of the pad to avoid ugly surprises ...

One last remark regarding mechanical parts: the sliders on the model we tested were a bit stiffer than the sliders on the old Axiom. It's neither better nor worse, it's just different. We'll have to wait and see if it stays that way after long hours of use.

One of the main new features of the Axiom Pro is the HyperControl technology that provides some sort of super mapping for immediate use with most sequencers on the market: Pro Tools, of course, but also Cubase, Ableton Live, Logic, Reason, and some virtual instruments (most of them by Digidesign). No Sonar, Digital Performer or Samplitude preset at the moment (to make competitors' life harder?). It's no surprise that neither Studio One nor Reaper take advantage of the HyperControl technology. This does not mean that you cannot use the Axiom Pro with these programs, it only means that you'll have to make your own mapping like you always did, and it's a pity. 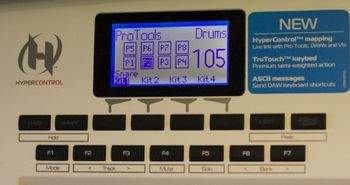 It's a pity because the HyperControl technology comes in really handy with Ableton Live 8, for example: it allows you to control most sequencer functions without having to touch the mouse, except to drag and drop loops or plugins. Everything else can be done directly on the Axiom and you can see every parameter you edit on its LCD display, in real time. A small disadvantage of the display is that it doesn't react fast enough to quick movements. Even though the controller follows the sequencer perfectly, the values shown on the Axiom's display are sometimes too imprecise (especially encoder values) or outright wrong: the pads' velocity values displayed on the LCD can be very strange but the sequence recorded is perfectly normal. The real genius of the HyperControl function becomes manifest with virtual instruments and effects rather than a sequencer: by toggling from Mixer mode to Device mode your Axiom turns into a dedicated controller. You can actually edit a synth's LFO or the cutoff frequency or envelope of a filter with the information displayed on the keyboard's screen. It's a nice feature but it has its limits: unlike Novation's Automap, HyperControl cannot map the parameters of any VST effect or instrument on the fly. So it's impossible to enjoy the Device mode with the latest freeware or even a virtual monster like BFD, Kontakt, etc. To do that you'll have to use the MIDI Learn mode available on most programs.

Last but not least, the Axiom Pro has another interesting function: you can send ASCII messages to your sequencer using most of the control elements (pads, sliders, encoders, numeric keypad) just like if it were a computer keyboard. Thus, you don't have to assign each control element of your DAW to a MIDI Controller message to control it with your Axiom; and if you were to assign certain shortcuts to the Axiom buttons you could actually do without your computer's keyboard.

The Axiom was already a very good controller keyboard and it's no surprise that the new Axiom Pro outdoes it with its improved keyboard, HyperControl technology, LEDs and ASCII message support. It will take you no time to learn it and its several sequencer mappings will allow you start working right away. Considering that it provides exactly the same control elements as its predecessor and that there is no 88 weighted key model, this Axiom is more like a Mark II than a Pro version. It's an excellent choice for people looking for a high-quality, versatile keyboard but I'm not sure it makes sense for people who already own the previous model.

It is definitely worth the 30%-40% price increase compared with the older version, but it's probably too high a price for Axiom users considering an upgrade. We regret that M-Audio didn't seize the opportunity to add more new functions (more pads or an XY pad, like on competitor products). We can't really complain about anything on this model except that it's more like an Axiom II than an Axiom Pro...