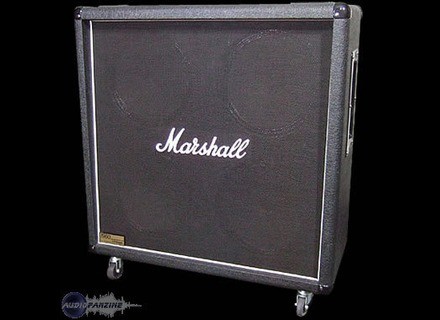 Buy this productView price information >
View other reviews for this product:
Ok, so Marshall 1960A cabs are literally everywhere. You can find them in probably every major city in the world. But, the 1960B cabs are a lot less prevalent for some reason. I actually much prefer the B cabs because of their straight baffle. They tend to sound a little bit beefier and less piercing. The standard B cabs come with G12T75's which tend to work well with the mid heavy voicing of most Marshalls, but the BV cabs are where it's at! the V in BV stands for Vintage, and that is referring to the Celestion Vintage 30; probably the most popular speaker in rock. They are just very versatile speakers in general. Sounds quality is top notch. Marshall cabs might be a little looser than say a Mesa Rectifier cab, but really they sound great.

My only gripe about Marshall cabs is construction wise. But, I'm not talking about general cab constructions. They do cut corners a bit with the particle board back, but that's not a huge deal. The handles, corners, casters, and switch-plate are all cheap. There is no excuse for this on a 1k cab.

The great thing about Marshall cabs is that you can find them for dirt cheap. There are so many that you can literally buy them for $200 if you find the right cab.

Not the best cab out there, but it does the job very very well.
Did you find this review helpful?yesno
Cookies help us improve performance, enhance user experience and deliver our services. By using our services, you agree to our use of cookies. Find out more.