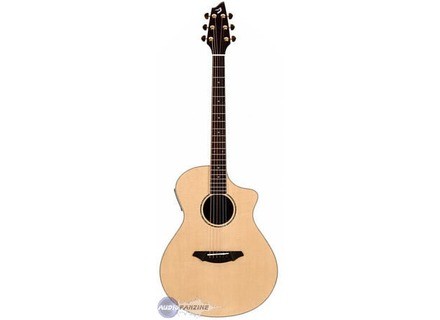 View other reviews for this product:
As far as I've been informed, the Breedlove AC series is mostly manufactured out of the Bend, Oregon workshop. Otherwise they may be from Korea, as many guitars are nowadays. The AC25 sports a standard fretboard with just under two octaves in frets, a pull-through ball end style bridge to get away from the annoyance of bridge pins, a superior pre-amp with built-in tuner, and classic C-neck.
<p class="bbcode-offtopic">Off topic: <span>On a tangent, I must say that the general populace of musicians have the wrong idea about over-seas factories. Since around 1994-97, the vast majority of American-based manufacturers dealing in high-end instruments have made it a point to pay fair wages to the workers in said factories, ship the same high quality materials there, and put extra effort and funds into safe shipping. Many companies such as; Fender, Gibson, Takamine, Breedlove, Martin, and Taylor have built and contracted their own factories in Korea, Mexico, and other low-overhead countries to avoid the cookie cutter instruments being bought and resold by lower end companies.</span>

This is one of my favorite guitars in it's price range. I own this guitar and recommend it to all of my customers who understand that dishing out an extra $100 or $150 can mean a world of difference. The value is multiplied by the fact that Breedlove's name is not such a household world to guitarists like Taylor and Martin, (This lowers the cost. Don't pay for advertising!). This fact doubled with the playability and comfortable design make this an incredible buy for most intermediate to advanced players. The AC25 is my choice for playing live in medium to high sized venues. The design of the cutaway not only makes it more ergonomic, but also helps cut feedback. However, a good Screeching Halt from Planet Waves is always a good idea to keep with you. Don't think this guitar can cut %100 of feedback, since no acoustic guitar can, not even Ovations.

The sounds you can get out of this guitar fit me perfectly when I'm playing low-key, folk style songs. I would suggest Plugging into a tilted Fishman or Roland if you don't feel like running straight into the PA. The nicest part of the plugged-in sound is that even at a flat EQ, you get an incredible resonance and tone out of this piece.

The one drawback to the playability of this guitar is the pull-through bridge. While it is convenient not having to deal with bridge pins, the bridge puts less bend in the ball end side of the strings. This fact in turn takes away from the attack and sustain abilities of the guitar. It's perfect for me since I rarely play lead with an acoustic.

Overall, I would say this guitar is ideal for a frontperson or rhythm player. Blues and jazz players who put the guitar in front of the rest of the band might be somewhat disappointed, but for the rest of us it takes care of business for a rather decent price.
Did you find this review helpful?yesno
Cookies help us improve performance, enhance user experience and deliver our services. By using our services, you agree to our use of cookies. Find out more.