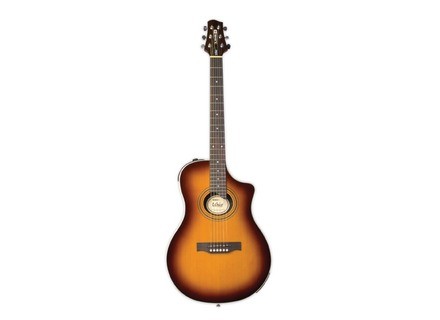 View other reviews for this product:
I've been playing for over 35 years, sometimes in bands, sometimes not. I've owned some really great gear and I wish I'd never sold some of it because it would be worth a lot of money nowadays, especially the 60's guitars. Musical tastes are pretty wide and varied.

I had read about these things and thought it was a fantastic idea, because I play a lot of open tuning stuff, and re-tuning in the middle of a set is a pain. I tried one out in a Sydney shop side by side with my Guild Dreadnaught. The Guild sounded better, but when I weighed that up against the sheer versatility of the Variax I eventually sold the Guild (I have another two anyway) and bought a Variax from the US on ebay for $930. By the time I'd paid for shipping and customs charges it ended up costing me about AUD$1600 - still a lot cheaper than the Australian RRP of AUD$2700.

I pretty much like everything about it. Looks great, incredibly easy to play, and the versatility in a gig is amazing. One song I'm strumming a Jumbo in open D, seconds later I'm bottlenecking a dobro in open A, straight after that I'm fingerpicking a 000 in straight tuning. Sounds great through a PA - I know because I sometimes lend it to other performers just so I can hear it from front of stage. Doesn't sound the best through my acoustic amp I must admit, but when I plug it straight into my Mac to record with it's just perfect. No mic problems, just clean perfect acoustic sounds.

Personally I'd prefer a slightly wider fingerboard, but that's just my taste. Some of the sounds are pretty useless, but I guess they're useful to SOMEONE? And it sure goes through the batteries. You really need to use the power supply all the time.

Solid construction and feels good and well crafted. One of the pickup devices failed not long after I got it, which meant that no sound came from that string at all. But it only cost about $30 to fix. Feels like a Les Paul to hold, although it's been a fair while since I held one of those. Similar weight and size.

Great - definitely the most useful piece of equipment I own. I use it all the time and without it I probably would have given up doing solo gigs by now.