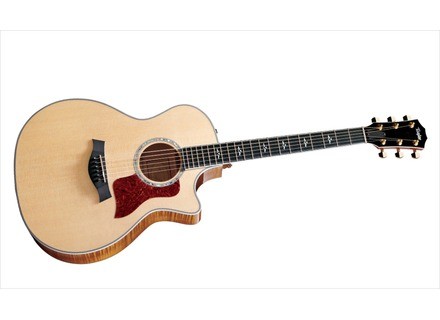 View other reviews for this product:
I purchased this guitar from an e-bay seller after playing one at Playground Music in Ft Walton Beach Florida. I paid $1600 for it and it was in perfect shape.

This guitar, quite simply, is the best guitar I have ever played--or seen for that matter. Aesthetically, my 614CE has a beautiful tobacco sunburst stain which is an incredible eye-catcher. People gravitate to it when I pull the guitar out just to see it. Of course, the sound is what is really important, and this instrument never disappoints. The maple provides a warmth not found often with either traditional or non-traditional woods and although sustain could be a bit better unplugged, that issue is never a problem when I use it with my Marshall AS50R amp. My brother-in-law is one of the top guitarists around (Tom Edwards, aka Tom Duarte) and he absolutely loves the 600-series Taylors, especially the 614CE. Also, I got a chance to see Doyle Dykes at Playground Music and he played one of the store's 614CEs (grabbed it right off the wall) as well as his own custom Taylor. What an incredible guitarist! He had nothing but great words about Taylor as a company and the 614CE in particular. That says it all.

I have a bit of trouble with the Fishman blender causing feedback and have to work it a bit to clear it up. The new Taylor Expression System clears this up and is really the way to go.

Without a doubt, Taylor produces among the finest guitars in the world. The quality is unbelievable--this guitar will make you better because of its ease of play and your increased desire to play a work of art. Additionally, I appreciate the ethical integrity and moral values Bob Taylor and his company upholds. He is a strong man of faith (as is Doyle Dykes who is also an ordained minister) and charitable beyond words. That is important to me--highest quality with equally matching ethical character.

This is not an inexpensive musical instrument, but if the price is within your means, I can think of no better guitar to own. If Tom and Doyle praise this instrument continuously, then you know you have a gem in your hands.