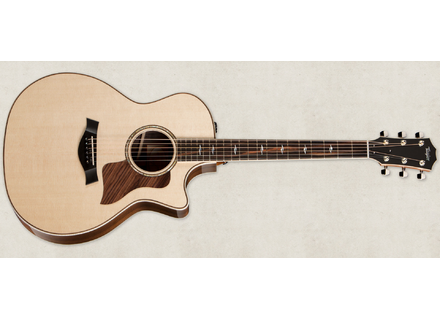 814ce 2014, Acoustic-electric Folk/Western guitar from Taylor in the 800 series. 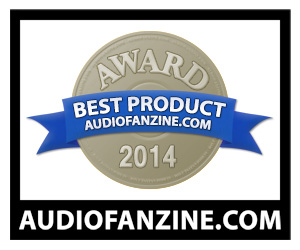 It's always a pleasure to review a Taylor, an American brand that stands for high quality among musicians.

One particularly unique quality of the guitars made by Bob Taylor and Kurt Listug is the bolt-on NT Neck ─ a system that, according to the manufacturer, provides better resistance to string tension. It consists of a continuous piece of wood screwed all the way to the 19th fret. In addition, Taylor guitars have a spacer system placed on the body top in order to facilitate repairs.

The new Grand Orchestra series, introduced in 2013 to replace the Jumbo model, has earned quite a few awards. Due to its success, and to celebrate the 40th anniversary of Taylor, Bob Taylor decided to take on the 800 series, the brand's crown jewel. With the collaboration of master luthier Andy Powers, who is responsible for the evolution of the brand's guitars, Taylor has recently introduced its new babies.

We had the pleasure of receiving a Taylor Grand Auditorium 814ce at Montmartre Recording Studios.

Its name makes direct reference to the main features of the guitar. The first digit (8) defines the instrument series, the second (1) concerns the wood used for the soundboard (spruce) and the third (4) refers to the shape (Grand Auditorium).

"CE" means that the guitar has a cutaway and uses the Expression System technology. The latter is a set of sensors that was originally positioned in the body behind the neck and above the sound hole, key areas for the transmission of sound waves within the body. But it is also worth noting that this system was refined (currently in it’s second version) and is now used in all new Taylor acoustic-electrics. It's a return to piezoelectric pickups, three of which are placed behind the saddle. It still features three control knobs: Treble, Bass and Volume.

The beauty of the guitar strikes you as soon as you open the fly case, which is very solid and customized for every guitar. With similar dimensions to the Dreadnought, the Grand Auditorium 814ce has a curvier, more voluptuous profile. It's sexier, period! 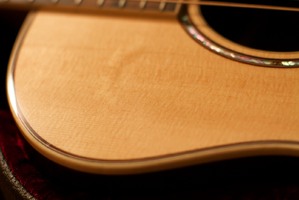 The guitar is brilliant, thanks to the maple binding on the body, the fretboard and headstock, which has always been Taylor's trademark. The rosette design is simple but superb. It's a true piece of jewelry made of abalone. The rosewood pickguard is not too thick and feels nice to the touch. The ebony fretboard, along with what Taylor calls "Element" neck inlays, provide a nice effect, without being vulgar. Finally, the ebony headstock is simple and sports the name Taylor. As you can see, it's an elegant guitar with a clean-cut design that leaves nothing to chance.

Access to the upper frets poses no problems. The guitar does not come off as too heavy. The overall sensations are very good. Getting familiar with it is pretty straightforward, as the guitar feels very natural from the get-go. In short, the first moments you spend with it are very pleasing! 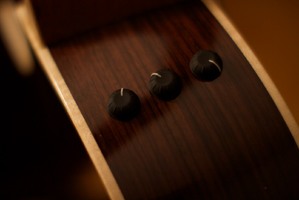 We must also add that the new Grand Concert and Grand Auditorium guitars come with Elixir HD Light strings, which were co-developed by Taylor but can also be used with other guitars (the rest of the new product range features Elixir’s Acoustic Phosphor Bronze Nanoweb strings). These strings give the guitar a very rich sound, with nicely balanced mids and lows. The differences between string sets may be very subtle, but we can attest that they seem perfect for this guitar. The fact that they last longer than most other strings obviously plays in their favor, but their price is also higher.

We tested it at Montmartre Recording Studios with the help of Fabien Mornet (guitar player for Carla Bruni and other big French acts). We compared this brand-new Taylor 814ce with other instruments of different qualities and prices: A Takamine EN10c with its 1999 preamp, a Martin DX-1 with its PREFIX Premium Blend preamp (less than four years old), and a 1997 Gibson Custom Shop Doves in Flight.

Every guitar was recorded with a Neumann U87 into a Neve 1073 preamp. The jack output of each instrument was connected into an API 512c.

The analog-to-digital conversion was made with a Lynx Studio AES16e + Aurora 16 system into a Mac Pro.

We picked an acoustic guitar anthem as our sample song ─ "Hotel California" by the Eagles ─ and we also compared the preamps of all guitars to assess the quality of the Taylor preamp.

Here you have our overall impressions, but it's up to you to make your own opinion: 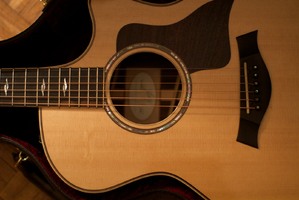 The Taylor is quite brilliant and it has a nice presence. The highs are well defined, without being aggressive or exaggerated. The mids are clean and the lows are generous without being muddy, they are natural and precise. The volume is the same along the entire neck. It is very nice and easy to play with and its acoustic power is evident.

The Takamine seems muffled, it lacks breadth. You can feel a sort of dip in the mids.

The Martin is quite balanced, the low end is less warm, it seems to have a bit less presence.

The Gibson seems to be the most natural of all. It has no brightness boost like the Martin and Taylor. The lows are beautiful and powerful.

When it comes to the preamp, the Taylor is simply incredible. The reproduction is natural, with highs that are neither overly present nor artificial, as is usually the case with guitar preamps. Recorded directly, it will easily impress more than one guitar player (we actually put it to the test and most people thought it was a real mic take!).

In comparison, the preamp of the Takamine makes you want to cry, it's the typical sound you simply don't want to hear. The Martin is OK, but lifeless, like the Gibson, which is also a bit dull. This side of the Taylor is quite a revelation for us. It's a guitar that will sound fine in all sort of live situations, for example.

To finish, here you have a couple of takes we made with the Taylor (without the built-in preamp), no processing applied. As you can hear, it sounds just fine on its own!

We all came to the agreement that we really like (and even love) this Taylor, which holds its promises as a versatile guitar that is very pleasant to play with and has a refined look that seduced us all. It's the ultimate modern guitar! To get your hands on it you'll have to dig deep in your pockets (about $3200), but when it's true love...

A big thank you to Fabien Mornet for helping us out!