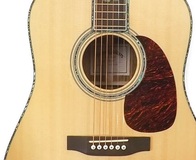 While electric guitars have seen a decrease in sales in recent years, the acoustic guitar market seems to be as healthy as ever.

The last couple of months we have asked our French readers to tell us which are their favorite electric guitars, analog synths, drum brands, electric bass guitars and even DAWs, so we decided to ask them about their favorite folk acoustic guitars. The offering is huge, ranging from historic brands, up-and-coming challengers and entry-level products. We decided to focus on legendary models, popular instruments that have, in their own way, made history. With this in mind we asked our French readers: Which is your favorite legendary folk acoustic guitar?

And these are the results:

There's no doubt about it, the poll looks like a true wild west standoff: mom vs dad, Yankees vs Red Sox, Star Wars vs Star Trek, or… Gibson vs Martin! While both brands are equally represented in the results, the top four spots leave no room for doubt. It's no short of a surprise to see Gibson beat Martin with three of the most voted models.

In fact, despite the Martin D-28 ranking first with 15% of the votes, the J-45 (13%), J-200 (10%) and Hummingbird (10%) make Gibson clearly stand out. The gap between them and the rest of the models is significant, considering that the D-45 only got 5% of the votes to land the fifth spot. However, it's also worth noting that the rest of the Gibson models had to settle for a place at the back of the pack, whereas several Martin models had much more decent results.

Taylor, the youngest brand among the ones included in the list, suffered a serious setback. Much loved in the acoustic guitar world, it only managed to capture 7% of the votes summing the scores of its four models in the list. Taylor guitars seems to still have a long way to go before they can be considered legendary!

Finally, the Legend and Adamas models by Ovation, got a decent number of votes, which seems to imply that the differentiation strategy of the brand is bearing fruits. For its part, Guild, the third brand in the list after Gibson and Martin, got only an anecdotal 3% of the votes with the D-55, and its 12-string guitars didn't really got any love from our readers.