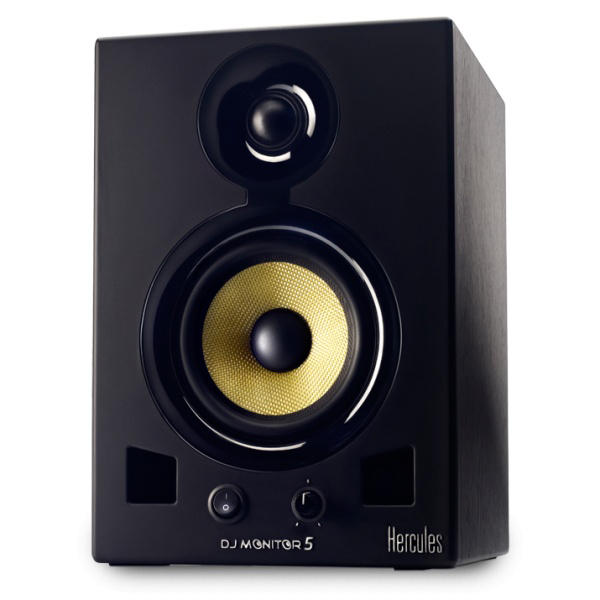 Well-known for its interfaces and control surfaces for DJs, Hercules surprised us with the XPS 2.0 DJ Monitors and their excellent value for money. If you are curious to hear the DJ Monitor 5, which cost twice as much and in terms of features, price and yellow woofers certainly tread the terrain of KRK's Rokit RP5…

If the XPS DJ Monitors emerged as some sort of missing link between multimedia and monitoring speakers, following in the footsteps of Edirol’s MA series, there’s no doubt that with the DJ Monitor 5, Hercules has decided to drop multimedia for good and focus on the home studio market. For example, control elements (power switch, volume, bass and treble controls) aren’t only on the right speaker anymore. The front and rear panels of both DJ Monitor 5 speakers are nearly identical.

And since describing one is describing the other one, let me give you a brief overview. Besides a 5" woofer, a 1" tweeter and two ports, the front panel features a power switch resembling that of ADAM speakers and a volume control with a blue halo. The volume control is not detented, not even at the center: a big miss.

On the rear, besides the power cable inlet, we have three connectors: unbalanced RCA and balanced 1/4" jack and XLR. Right next to them we have switches to modify the speaker’s frequency response: a switchable low-pass (56 Hz, 80 Hz and 100 Hz), as well as a shelving filter for the highs and another one for the lows, each offering the possibility to boost or attenuate 2dB. Nothing extraordinary, but very welcome options to adapt the speakers’ frequency response to your room.

Regarding the invisible part, the speakers feature a class A/B bi-amplified system: 30 watts for the tweeter, 50 watts for the woofer, with a crossover at 2.5 kHz and a 12dB/octave slope. The frequency response is supposed to go from 50Hz to 30kHz. 30kHz? Very interesting for those of you who want to communicate with bats or train dogs. Remember that, on paper, human can hear up to 20kHz, in the best of cases, but that value decreases over the course our existence, especially if you have already suffered acoustic shocks, for example, if you live in loud environments or use your personal music player too often.

Let’s finish by pointing out that each speaker weighs 15lbs (7kg) and has reasonable dimensions: 12"/31cm high, 8.7"/22.2cm wide and 9.2"/23.5cm deep. A good size for two-way, 5" speakers (wider than the ADAM A7X or KRK Rokit RP5 in any case). In terms of look, the DJ Monitor 5 retake the design of the XPS: a mix of wood on the sides and both matte and glossy plastic on the front panel, whose black color would be pretty plain if it wasn’t for the yellow woofer that gives them a KRKian touch. Finally, it also includes four self-adhesive non-slip pads to guarantee that the speakers stay firmly in place.

Now that you know all about them, let’s hear them out.

From low to high

Yellow woofer versus yellow woofer: the Hercules will be compared this time against the brand-new Rokit 5 G3, which are more compact and also better looking, in my opinion. But it’s what’s inside that matters, right? Let’s throw a couple of lossless files to them and see who wins the match.

Metallica’s Enter Sandman is interesting for the test because Bob Rock’s wall of guitars gives us a lot of information about the mids. Plus, its intro with lots of toms and open hi-hat allows us to learn more about the low mids and the high end of the frequency spectrum. And the differences between both contestants is flagrant right from the start: the Hercules clearly inhibit the lows of the toms while they are very present on the KRK. The open hi-hat on the riff reverses things on the high end, with the KRK flagrantly lacking detail in that frequency range. “The highs and the high mids, ” we would be tempted to say because, be it on the cymbals, the attacks of the guitar or, more importantly, the vocals, the Hercules are clearly more interesting than the KRK that deprive us from of lots of details and exhibit a significant lack of air. It’s very simple, when we switch from one pair to the other, we can hear James Hetfield move closer or farther away.

This is confirmed with Gorillaz’s Feel Good Inc and its big pop/hip-hop production. The bass is a bit fatter with the KRK, but at the price of a very dull reproduction across the upper frequency range. As a consequence, the Hercules prove to be much more pertinent than the KRK when it comes to reproducing the guitar attacks and the 1001 little noises that inhabit the high end during the whole song. More brilliant, they also feel much more comfortable than the Rokits with reverbs and, thus, with the location of instruments in the soundscape.

The Raconteurs’ Consoler of the Lonely confirms pretty much the same, but in a more violent way at times: very present on the Hercules, the catchy tambourine that we can hear in the bridge of this overcompressed song disappeared almost completely from the KRK. Almost on the brink of getting a red card, the KRK nevertheless make up for it providing a bit more lows on certain songs, like Massive Attack’s Angel or on the kettledrums on Strauss’ Also Sprach Zarathustra. And that’s what we regret most about the DJ Monitor 5: we would’ve loved a bit more energy in the low end.

However, the Hercules come better off even on this last song thanks to the high frequencies. They are clearly less dull, doing justice to the inflections of the brasses, the details of the strings and providing a sensation of air that is completely absent from the KRK, which seem to veil everything that goes through them.

Lastly, Lou Reed’s Walk on the Wild Side allows us to judge the low mids of the double bass and the detail of the highs with the reverbs and the brushes. But most importantly, it allows us to see how the speakers perform with the most familiar instrument of all: the human voice. On this point, the KRK are much more flattering with the vocals in the lows, which is very pleasant, but the lack of air gives us the impression that the vocals are flat on the Rokit while they stand out from the rest of the mix with the Hercules. And if the double bass lacks some substance with the DJ Monitor 5, we must also admit that they provide much more detail regarding the attacks of the guitar, the choir’s reverb and the kick’s beater. The attack of the latter is blurry with the KRK while it is clearly defined with the Hercules.

Such a flagrant difference ought to be checked with another set of speakers: even if the comparison is unfair considering their price and the woofer size, we compared the Hercules against the Adam A7X, which we found relatively brilliant. The lack of low end of the DJ Monitor 5 is even more flagrant when we switch to speakers that are better fitted to reproduce lower frequencies. But we must also admit that, on most songs, the high end is much more similar to the ADAMs than with the KRK. When it comes to the mids, the ADAMs sound a bit more hollow, which adds to the good points of the DJ Monitor 5.

And, to wrap it up, we must point out that the controls available on the speakers don’t really allow us to compensate for their inherent personality traits: even if we boost the lows 2dB, we are far from being able to make up for the flaws observed.

Hercules struck a blow in the multimedia world with the small DJ Monitors XPS and now it has made a successful conversion with these DJ Monitor 5, which are the brand’s first “serious” monitors, even if still within the entry-level category. With a very nice high end, they nevertheless lack some power in the low end. While we never expected to hear big and fat lows come out of this tiny speakers, we regret that the low mids are also a bit weak, which is somewhat strange for speakers aimed, in theory, at a big bottom-loving crowd. Overall, the DJ Monitor 5 perform better than similar products from more renowned brands. Let’s hope that the French manufacturer will complete its speaker range with an 8" monitor and, why not, even a subwoofer. To be listened to and followed closely.