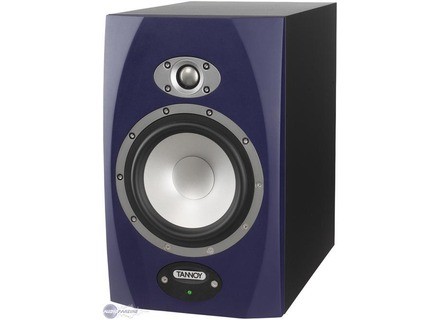 Reveal 6D, Active Monitor from Tannoy in the Reveal series.

Buy this productView price information >
View other reviews for this product:
The Tannoy Reveal 6Ds are a set of high quality near field studio monitors, suitable for all sorts of different uses. The monitors are active, so they don't require a power amplifier as they already have one built in. These are basically a newer version of the popular Reveal Actives, boasting an incredible amount of clarity and precision. The monitors can be used for monitoring during recording, editing, mixing, and any other sort of usage inside in the studio. It also has switches in the back for tuning the monitors to your room. The monitors also have a very sleek design to match it's great make up.

The overall sound of the Tannoy Reveal 6D is very impressive. The sound comes through crystal clear across the board, with a very respectable amount of low end presence for a smaller set of near field monitors. It has a silky smooth high end presence as well, and I can't really think of any holes in the sound if it has any at all. The sound isn't unrealistic, so you can trust them to mix on for sure, which is really the most important consideration when thinking about a set of studio monitors...

The Tannoy Reveal 6D are a set of studio monitors that will crossover into both home and professional studios. They certainly have the sound and clarity of professional monitors, and even though they aren't the cheapest monitors on the market, for a bigger home studio they would certainly be a great investment. Having a great set of studio monitors is one of the most important aspects of putting together a studio, as everything you hear comes from them, so they need to be trustworthy. The Tannoy Reveal 6Ds are just this set of monitors, as they are very trustworthy at a price that won't break the bank. Even so, most home studios probably won't be able to afford these, but for those who can the 6Ds are definitely worth it.
Did you find this review helpful?yesno