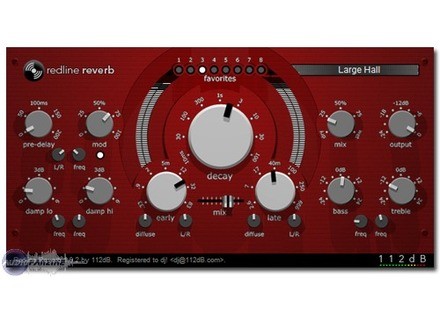 112dB has announced the release of Redline Reverb, a new musical reverb based on a completely new and original concept that excels in both warmth and transparency at extremely low CPU usage, according to 112dB.

Its core algorithm is based on the Rev-6 and Space Master Reaktor ensembles by Martijn Zwartjes.

Redline Reverb is described as a fully algorithmic and true stereo reverb with possibilities "far beyond the conventional" - check out the 112 factory presets for a comprehensive showcase of what it can do.

According to 112dB, unlike conventional algorithmic reverbs, Redline Reverb does not need separate plate, hall, and room algorithms. Instead it supposedly features a comprehensive yet intuitive parameter set that allows you to easily recreate any given reverb characteristic, leaving you free to create lush smooth vocal reverbs, convincing room simulations, almost infinite reverb tails, synth pad and delay effects, and everything in between.