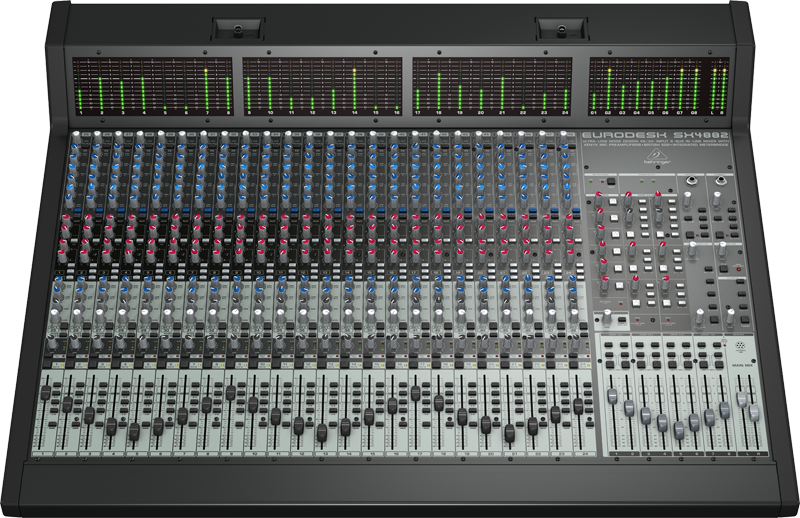 Analog Mixer from Behringer belonging to the Eurodesk series.

Only regret: no automation. At that price, do not dream.

The interface is very intuitive. The budding sound engineers will appreciate the flexibility and modularity of the SX4882.

Manuals are often criticized for not being clear ... Behringer is never the case.
Sorry, but a manual is not a tutorial to learn how to mix.

While this console at a price type "general public", it remains a professional console. Revise its technical dictionary before opening a manual.

Studio, one can only admire its ergonomics and modularity: Monitors A / B, talkback, solo on all devices and buses ...

The sweetness of his sliders and button recalls the Allen & Heath consoles.

Announcement effect or not, the SX4882 surprised by the clarity of its preamps.
"Zero noise".

On the oscilloscope is little nit. THE signal is correct. It gets worse and really enjoyed expensive. Nothing is perfect.

But, it sets clear your bad your bad connection and hardware.

The non-sliders linératité its 100mm that it respects the dynamics of your signal.
Do not listen to the sound with speakers legacy, such as NS-10.

I use it for over a year.

Live and in studio.
The sound is unlike any known console. So much so that projects that have been mixed on SSL or Yamaha 02R, remixed with a SX4882, filled with surprises and you doubt.

We quickly made the comparison between singer and miauleuse ... Provided you have good monitors.
This console requires you to reconsider your antiquated equipment. But further underscores the warmth of analog.

The amount of hardware devices to attach to it is lower than any Yamaha digital console, to make a good mix dynamic.
For crazy-mad addicted to the distortion and compression of patient: go your way. This is not a Mackie.

There is no console on the market offering such a value.

Being a sound engineer specializing in digital since 1998, I've used hundreds of configurations.

My team was shocked when I bought this console, but have had a head full when I started mixing in pure analog.

It's not perfect, because in our times, projects require more automation and we do more music like before. There is mounting.

So it is not suitable for those who want to mix and edit both.

My next experiment will be to associate with him converters SSL Alpha channel ...

At this price, they are silent and you buy a second.
00