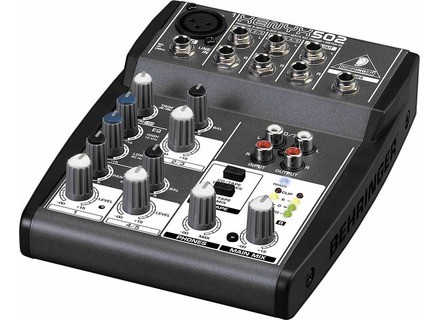 Xenyx 502, Analog Mixer from Behringer in the Xenyx series.

Buy this productView price information >
View other reviews for this product:
See the website of Behringer, everything is there.

The connector cord is so badly screwed up that there are false contacts all the time and turn the mixer behringer s'teint and without asking for anything that he has been doing a horrible CLICK you screw up eardrums, followed by a deafening noise of mass. Do not have the misfortune to listen to the headset has arrived when ... It frankly is 0.

Basically, I bought the 502 for power XENYX bnficier a headphone amp that I'm not on my sound card (I put the mixer between my sound card and my speakers). It adds too little wind for me that has Drang. For cons, the microphone preamp and headphone amp make noise, but the price could not expect anything else.

So it's very simple, because of the problem of loose connection, I could not use it ... I tried to fix the cord with tape, but nothing ... So I changed the t cons another small Alesis MultiMix 4 which is not unplug itself. Too bad because the price is really great ...
See the source
Did you find this review helpful?yesno
Cookies help us improve performance, enhance user experience and deliver our services. By using our services, you agree to our use of cookies. Find out more.