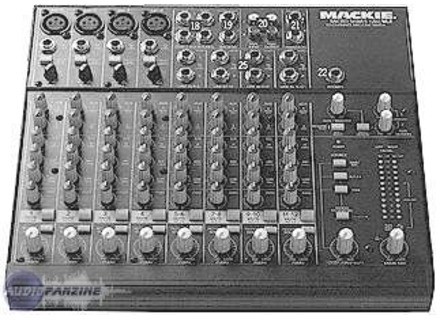 MS1202-VLZ, Analog Mixer from Mackie in the Micro series.

View other reviews for this product:
J 10 put him there because everything except the internal effects, but believes that j c is not its role

Manuel was clearly my taste, if it is not corny s do without.
the lack of knobs vents, too tight, c is a like these days ....

But there is breath tolrable, fau not seek early bete.equaliseur well, not at the top of gamme.console transparent, a little flat for my taste.

I use the J 2 years, I jl exchanging against a tascam M308, I have no regrets, the Mackie is a Swiss Army knife has cottrop small knobs emissions, which default may be an advantage when there is little place or that it is moving is good for souvent.c models or dbuter.a t my first console, it has a reputable on in my opinion, maybe the pro version has nothing to do. .., or other small consoles are worthless ... the price: too expensive for what it is c, d except ocaz. I would do not have that choice because it earns grsillements time (music power n not even a grudge, so that she had two years!), recover the well in order to avoid dusts! after c is too late ...
for anyone who moves or one with little room, I recommend the purchase of ocaz by controlling much that it does not turn the grsille potards.acheter new?: not make the same crap that I buy instead (for the same price) another console ocaz, more imposing, beefy, in his vintage, do research, try, Listen, and I'm sure you will find your bb ... the Mackie 1202 VLZ remains for me an good toy.
See the source
Did you find this review helpful?yesno
Cookies help us improve performance, enhance user experience and deliver our services. By using our services, you agree to our use of cookies. Find out more.