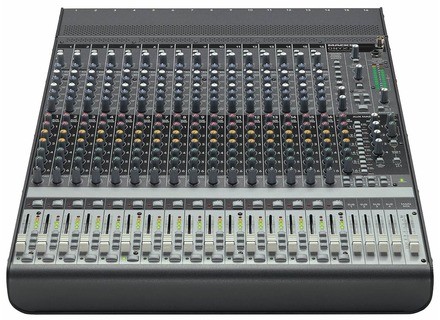 Onyx 1640, Analog Mixer from Mackie in the Onyx series.

Value For Money : Correct
View other reviews for this product:
- Rack Console (trs but deep, it was dj say, right?)

- It has 16 mic / line channels, including two in comuter line between high impdance, 6 dparts auxiliary 4 ffects which returns a pair of assignable sub groups and four subgroups assignable in pairs .

-Connectivity is trs pro with XLR jacks and 6.35. Dirrectes outputs are taken on subD 25.

-The qualiseur is 4-band semi-parametric and on with a button mdiums commissioning, trs useful.

She has a damn good talkback section, except that the microphone is sensitive Intgr, trs sensible, even too sensitive. It is innutilisable live under threat of hanging. Fortunately, ill possibility is to connect another mic XLR.

In terms of regrets:
not of stro Galise and routable to dparts auxiliaries.
I would put 10.

The use of the console is simple, even for beginners like me.
The usual functions are easily accessible, however, I find the buttons on the qualiseur raprochs enough of each other. Beware those with big fingers! That said, let's not forget that the console is only 19''wide and the surface is busy ...
Watch out for between 1 and 2: The button that switches between the high impdance in between (which cuts between micro) is a little too PRS SETTING THE gain, which earned me a big scare at a concert.
The manual is on the site of tlchargeable Mackie and is rather well done but is available in English.
I do not put "only" 9 because of a.

Of breath, I have been once. Attention all the same: a micro c'tait the c *** a "soften the capsule" that I drilled to gain and raise the fader to the max to get a correct level. .. Since I have my new microphone (for PG58), I have no problem. It just means that the console does not blow.
The qualiseur: Ah! They are good equivalents perkins! Just press the power button in servive and direct, without touching anything, the sound is more dj sypatique, warmer ... It is a joy handle. With a, even garish ways are less aggressive ...

I received the beautiful month of January.

What I like:
Pramps them and quas
Talkback section-
-Output FireWire card and dirrectes optional.
Routing-options plutt many for this type of console

I ENTSO:
The micro-talkback really too sensitive
- I would have AIM have a small switch that allows me to choose to record tracks with and without equivalents.
- Able to route the signal from the FW card and tape in to the auxiliary dparts

Go, I put a 9 because of all And because the perfect is not of this world (has to know ...) But it's a console that's worth the money, the FireWire option c ' gniale is really small world and all its place in the heart of my config in home studio as live. I do not really regret having bought.
See the source
Did you find this review helpful?yesno
Cookies help us improve performance, enhance user experience and deliver our services. By using our services, you agree to our use of cookies. Find out more.