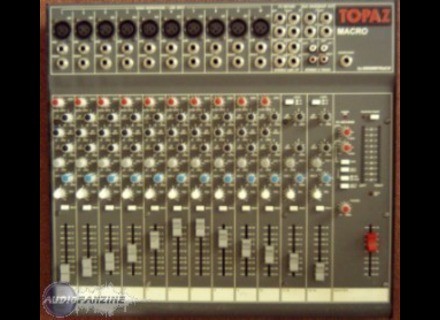 It's a nice & heavy analog console 14 votes, any metal.
It was the first 10 mono voices, but TRS connection working fine with assimétriques jacks! each of its slices contains a Hi EQ, med, low -15 to +15 dB, with a band from 20 Hz to 30 kHz. The slice also includes a Pan knob and a gain, the same for the line input, microphone input for and can be used with the solo button. Each installment features a balanced XLR input for microphone or microphones 10, with or without phantom power (single setting for all). The gain is not the same, as we are dealing with a signal line or mic: -20 to +20 db for the instrument and 10-50 dB for the microphone, the third entry, c is an insertion point of effect (TRS) for each voice. Finally two knobs for aux effect pre-or post fader, AUX1 & AUX2 from-infinity to +15 db. Not to mention the fader level,-infinity to +10 db.
Then there are two stereo line inputs; thin, the EQ has lost its correction mediums! The gain and also disappeared in its place was a switch to select the level -10 dBV or +4 dBu.
Add 2 effect sends Jack (asymmetric) and 2x2 switchable feedback!
The level of return effect can be adjusted from - infinity to + 15dB. Also the back of the recorder phono (2 in / out RCA). Adjust levels as phone & masteur, however, no control monitor or headphone output independent of the master, which lowers the note:

The large size of this table, with large buttons, and its configuration everything from classic, facilitate its use, but with this reservation: The entries are neither before nor behind, but on top of the table or FX inputs and outputs, stereo line, phono are too close to each other, which makes handling difficult jacks. In addition, the audio cables undergo torsion "gooseneck", which in the long run does not make them good.
As against the manual (in a very British English, that is excellent) is very verbose: on the operation as the wiring and connectors, all there!
A fine lesson in pedagogy.

This machine makes no noise! If this is a tiny red LED on the top, betrays no evidence it works. No breath, but the amplification of the headphone.
But in the mix, from my point of view of non-professional, no evidence as to the EQ, it seems to me quite effective.

I used this machine for a few weeks in the wrong configuration (in series with fostex 2016 and 280 because I need thirty entries, I put in the Topaz discontinued after the Other, less efficient, so that the big analog as SE1-X saturating entries fostex, I had to reduce the signal arrived at the topaz, there was not much!) Today I made the reverse: the Topaz gets the big sound without flinching and restores warm: it is the ideal machine for the old analog synths, I've plugged in an auxiliary multi-effect of poor quality (a ZOOM 1204) and yet with the good table, I can do something! Moral: there is no point having an expensive multi-effects, if the table is the "all-comers." I bought Pigale, fire Goodsound for € 300 and do not regret it, as did all I could buy these synpathiques merchants.
See the source
Did you find this review helpful?yesno
Cookies help us improve performance, enhance user experience and deliver our services. By using our services, you agree to our use of cookies. Find out more.