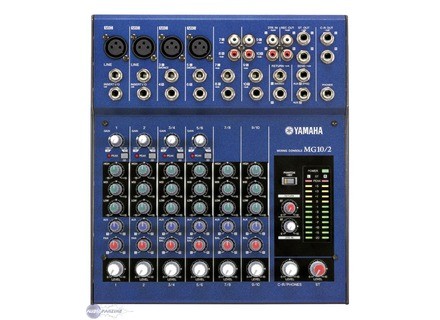 MG10/2, Analog Mixer from Yamaha in the MG series.

View other reviews for this product:
I've been playing drums since 1998, guitar since 2000, and synthesizers since 2001. I enjoy composing all sorts of music, from acoustic to funk to trance.

I paid $100 for this unit at CV Lloyd's in Champaign, Illinois. I needed a mixer that had a variety of inputs and outputs, but still fit my budget.

The best thing about this mixer is the quality you get for your money. This unit has virtually no noise and is priced with shoe-string musicians in mind. It has plenty of inputs and outputs, and even has channel inserts on the first two channels, which are great for adding effects. The first four channels have a built-in, switchable high-pass filter at 80Hz to cut unwanted low frequencies that often get added by external hardware. Each channel has a three-band EQ, balance, and pre/post auxilliary sends. There are four low-noise mic preamps, both RCA and 1/4" inputs/outputs, and even a phantom power switch for your condenser mics. All of these features combine to make one heck of a machine that you would expect to pay alot more for. I have never had a single problem with the unit and it sounds incredible with a good set of monitors.

The only thing I dislike is that four of the channels have both a mic (XLR) input and a 1/4" input, which isn't bad by itself, but you can't use both inputs at the same time. I know that's asking alot, so it's really not a problem.

This mixer is solid as a rock. It is sturdy, the paint is tough, the knobs are not slippery, and the sound is clear and crisp. I've left the unit on all night and it hasn't overheated once. It's got a good weight to it and could probably stand to be dropped afew times without consequence, though I wouldn't dare do it on purpose to such a great piece of equipment.

If you're looking for a top-quality mixer at a fraction of the price, this is the mixer for you. This line of mixers is even available with built-in effects and up to 32 channels, so you can handle even big jobs. This should be the first mixer you look at in your search because it might just be the last one you'll ever have to look at.