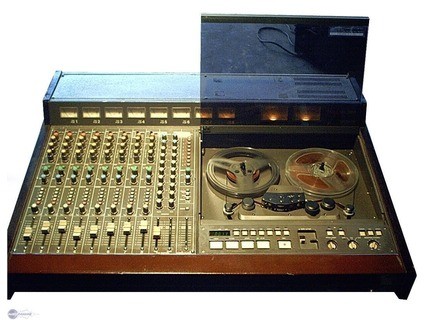 View other reviews for this product:
The Tascam 388 (also known as the Studio 8) is a 1/4" 8 track recorder with a built in mixer that was released in 1985. It is very similar in function to Tascam's cassette based Portastudio, although it never received that same designation. The mixer section sports 8 channels, 2 groups, an auxiliary loop, an effect loop, and "access" on each channel. The access runs just like a TRS insert, but without the need to run a TRS cable. Each channel has three band semi-parametric EQ. The machine can be run with or without dbx Type I, which is selectable by banks of four tracks (tracks 1-4, and then tracks 5-8). Track 8's dbx can be disabled for the purposes of SMPTE or other timecode encoding. All 8 tracks can be recorded on simultaneously.

The tape machine section is designed to use 7" reels at 7.5 ips. The tape should be of 1 mm thickness, but in a bind 1.5 mm thickness will work, too. The best tape still being produced for this machine is RMGI LPR 35. If you can find Quantegy 407 or 457 these will also work, and in a bind Quantegy 406 or 456 will work in spite of the additional thickness, shorter running time, and increased wear on the heads and transport.

Considering the relatively slow recording speed, this machine does a tremendous job of recording with the dbx noise reduction engaged. Without the dbx, recordings are hissy and noisy due to the narrow track width. This machine isn't really designed to produce tape saturation, which analog recorders are so renowned for, but it will produce solid sounding recordings.

The machine weighs around 100 lbs., so it is not very portable. It should be moved as infrequently as possible and should be located on a table or stand sturdy enough to support its weight. When being moved, make sure you have a friend to assist you due to its awkward size and weight.

In the five or so years that I owned one, the only issue I had was with the capstan belt. This is a relatively easy repair as their is documentation available from Tape Op online that demonstrates how to replace the belt and is a commonly needed fix.

If I had a wish list for this machine, it would be the ability to record on 10-12 tracks. For the type of rock 'n' roll music I played, recording onto 8 tracks was at times limiting, but it forced us to record creatively, which included squeezing multiple instruments onto a single track or recording dueling guitar solos onto one track (literally two mics on two separate amps to record while switching back and forth, then on mixdown using the pan knob to recreate the feel of two dedicated guitar solo tracks). In addition, at least two extra channels would have been appreciated, as is customary on the higher tiered cassette Portastudios, but I do recognize this would have made the 388 even wider than it already is.

For the money, this is probably the best "bang for the buck" for a starter analog studio as it comes with a decent mixer and could easily be interfaced with a DAW for additional tracks using a JL Cooper or other SMPTE to MTC device. If you are interested in this machine, make sure to acquire it locally, because shipping these is a recipe for disaster (believe me, I know). If you can get one in decent shape, a good price would be between $400-$600.
Did you find this review helpful?yesno