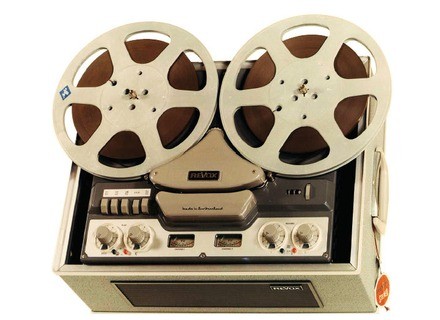 View other reviews for this product:
Bought on ebay ... regret (see below)
I like the look of authenticity rtro, and smell it when the lights DGIG heat a bit.
More srieusement, I can not use it the way I want, that is, as prampli, not as a recorder tapes. I want to record my tracks m'embtr a raw tape and renumriser. I wanted to pass the signal through the bowels of the can (or a dozen lamps) and go live in converters. It is possible, but you have to modify a connection to indoor, something I will not venture even to me.
I was kindly explained that we must all fawns bands is required since they are also the bands that make the characters sound. So you can save and numriser at the same time, but with the bands.

26/12/08
APRS quick searches for editing, hard to find someone in France who does.
So I have ordered tapes ...

Here it is I strips reu orders from Funky Junk (trs people count and not short on advice) which they have orders from the same RMGI in Holland.
We have to have the tapes and to initiate the registration for the well wishes bte rebalance the signal output to the converters. (Of RME in my case, not luxury, but for some vinyl numris is when even trssrieux)
When you register to the revox squenceur, there is a delay rather STRID (a plug in for Voxengo compensates). Without the plug, you have the solution if you save such a power guitar amp mic: play with your headset plugged into your PC for the battery or the click, but disables the monitoring in the track you play (if you hear the delay in the headphone and can not play.)
The more unpleasant surprises, the guy who sold it on E-bay announced that he worked flawless, but not in reading and recording there are slowing (motor, belt?). I cleaned all the spices or bandwidth without rsultat.
Nevertheless, once well under way sometimes has to remain constant, so I could run some tests bass, guitar, which motivated me to take him to funky junk for an estimate, a is the time, there frankly is not ringing, you hear exactly what you just played. So the crusade (4 months since I) is not over, but the next time j'achte recorder tapes (I Stud eyeing to 807 or A80), I took home a specialist in rllement I will sell it in perfect working order and state m'aiguiller for maintenance (hello funky Junk
after ending for.

It is possible to pass the signal in the revox not striped, and rebalance its output in converters, but the thing dbile inhrente mcanique but the machine must start the record button ( not just record and play and record)
Basically the technician who regard me as saying that it is a machine that rings of hell, that he frquences gnre are low and giving an impression gnreuses width and depth.
Important thing that I did not know there is a shop in the 17 specially REVOX me,
I told them so leave the bb because the problem came from the pressure roller (250 E pice + workforce), in two weeks it should be used with prt bands.
TO BE CONTINUED
See the source
Did you find this review helpful?yesno
Cookies help us improve performance, enhance user experience and deliver our services. By using our services, you agree to our use of cookies. Find out more.