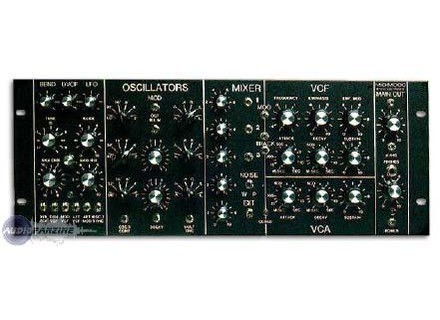 View other reviews for this product:
It is high time to put the record straight: there are no more differences between MIDIMOOG and MIDIMINI MINIMOOG between a series and start another in the series! I like some elements of a friend who knew the creators of HE at the time. Here are the facts:
There were over 600 or 700 racks MINIMOOG by them. Some cards come from MINIMOOG skinned (you could also provide its own machine so that they perform the operation at lower costs), others are remnants of the Moog factory and finally other cards are redone identically by SE. The name evolved into MIDIMOOG MIDIMINI only for legal reasons, the owners of the Moog "menacing time of trial. What makes a circuit of three provenances or mixtures can sometimes be found in the one as in the other and not in the original maps MIDIMOOG and redone in MIDIMINI.
One may wonder if this was the possessor of MIDIMOOG arrange to sell more? Since then, the mistake persists ... One can reasonably assume that MIDIMOOG early more often have maps Moog, that over time, the mixtures were more common to go to machines with more features redone originals; having the MIDIMINI made at the end ... But that's all.
In conclusion, everyone knows that MINIMOOG the beginning does not sound exactly like those with larger SN! In fact, none of it sounds the same and also what we like! Well it's the same for MIDIMOOG and MIDIMINI. For those who want to know, well, before selling or buying a MIDIMOOG or MIDIMINI: open it to see the guts of the animal is the only way to know with certainty. Then listen to it ring, because it is the only way to know if you fall under the spell of the beast!

MIDIMOOG / MIDIMINI?
See the source
Did you find this review helpful?yesno
Cookies help us improve performance, enhance user experience and deliver our services. By using our services, you agree to our use of cookies. Find out more.