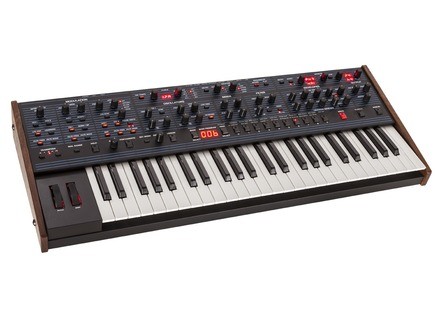 Value For Money : Correct Audience: Anyone
Buy this productView price information >
I've received a request to post a review after I updated my gear list, which I consider all the more normal on a community website like this.
First, I must say I’ve only owned the OB-6 for 4 days so far, which is of course too short to have an exhaustive and precise idea of it, even if I’ve spent a lot of time on it since I brought it home! However, I’m still going to post this review, even if I’m to edit it later, as so far the site lacks user reviews on this product.

The OB-6 is a complement to my large array of various synths where it fits a hole in the “analog polyphonic” department. It is to be used in a home studio context exclusively.

It is heavy, sturdy and – yes, well-finished. The knobs remind of the “old” Oberheim models, and even if they may look cheap at first sight they stand in place and are pleasant to use. A very well assembled product, no fault and the sides’ wood seems of high quality. I’m not much into the horizontal blue lines but they don’t look out of place either, and in the end I find this synth rather good-looking.
The keyboard’s touch is really pleasant, and so do the pitch and modulation wheels. 49 keys is on the short side, a 61-key model would have suited me better especially to be able to use it also as a MIDI controller.
It’s very easy to use, and while a beginner will probably have to look up for the basis of sound synthesis and read the manual, the controls are organized in a very logical way and allow creating very decent sounds quickly.
There’s no value indication on the knobs. In that, it’s neither a lack nor a problem, as working by the ear is done easily. However, I think it would be nice if the current value was reminded on the main display, which is not used in such a situation. Maybe on a future OS?
I also tend to consider the LFO setting as not progressive enough. The effect can be heard on the very beginning of the course and is difficult to set precisely, though you can still compensate using the modulation wheel.

The sound is awesome in a large array of genres. Technically, the signal-to-noise ratio is almost flawless, I checked it by recording some sounds and looking carefully at the curve in SoundForge.
Artistically, it seems very versatile to me so far. Bass, leads, strings, pads, you name it: everything’s eventual, with the awesome varying-response filter tending to push the sound either on the soft side when closed or toward brilliance while open. So in the end, you’ll rarely end up with an aggressive sound, which is not the OB-6’s home ground.
The factory settings (500 – well enough to do) are as a rule very good, with each offering an assorted sequence. You see a great work on sound design behind them, as they can be used “as is” but of course tweaking the knobs a little bit is always interesting just to see the changes induced, it often leads to pleasant surprises

.
I won’t write long on the inboard effects, they’re also high-quality and really bring something but I seldom use them as my synths are routed toward an Eventide Timefactor and a Space via my sound interface, so I use them when I need some effects, waiting to complete my effect chain with a Baloran Triko when I’m financially back on track (so far I’m in dire straits).

I don’t have the editor (yet) so I can’t comment on its editing and processing capacities. On that regard, I’ll have two things to say:
- an editor is very practical, especially to classify and save presets, however I prefer playing with the front commands;
- considering the price of the synth, the software editor could have come freely with it: just saying…

While we’re talking computer, a small digression: the OS’s update requires exchanging Sysex through MIDI or USB. I had a little difficulties doing it (using MIDI-OX), and I tend to think things could have been made simpler and quicker considering the machine has a USB plug. Certainly there’s a technical reason to that.
Also, unless I’ve missed it, DSI’s website doesn’t provide information on the new OS’s additional features and the online manual isn’t up to date yet.

In the end, here’s a quick overview of the synth’s pros and cons, which I may not have evoked so far but don’t impact the grade I give to this OB-6 anyway, as I consider it an exceptional synth.

Pros:
- radical sound
- very easy to use and inspiring
- high-quality keyboard
- polyphonically sufficient (at least for a poor keyboardist like me)
- very well finished
- 500 factory presets + 500 user presets. It’ll take you a while to fill’em all!!!
- MIDI implementation is almost comprehensive (no arpeggio or sequenced note send), with no signal send/receive issue and easy control from your DAW.
- the (English-only) manual is clear and easy to understand

Cons :
- 49 keys, 61 would have been perfect
- no value indicators for the knobs
- the LFO’s amount lacks progressivity on its early course
- cumbersome (especially in depth): plan room in your home studio!

Here it is, sorry for being long – and I’m still convinced I could have said much more!
I may edit later after using it more intensively, with also non-factory setting sounds as this is what really matters…

G.
Did you find this review helpful?yesno
Cookies help us improve performance, enhance user experience and deliver our services. By using our services, you agree to our use of cookies. Find out more.