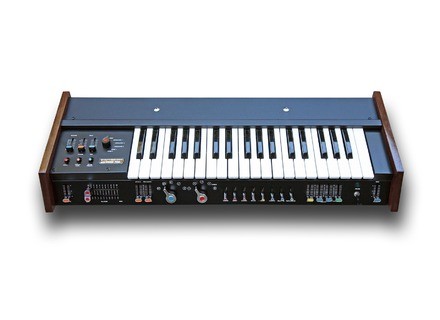 Value For Money : Excellent Audience: Anyone
Hi all,

I won’t get much into the details as to the Mini 700’s specs, (if you need it have a look at the Mini 700 reviews: https://en.audiofanzine.com/analog-synth/korg/minikorg-700/user_reviews/ )
I’ll mostly develop the question of the Mini 700S’s second oscillator.
I really think this second oscillator makes all the difference – to say the truth i rarely if ever use the synth without it. It doesn’t look like much, but in spite of its limitations it brings so much to the sound.

6 control buttons in all – no more than that.
3 faders, 3 switches and a selector.
- Balance fader: allows to set the balance between both oscillators.
- Pitch faders (Coarse and Fine): two self-explanatory ways to set the second oscillator’s pitch.
- Effect switch : a badly chosen way to describe the activation (or lack thereof) of the second oscillator.
- Long Sustain switch (acts on both oscillators): allows to obtain a very long sustain
- Travel vibrato switch (acts on both oscillators): accentuates the vibrato’s depth
- Selector switch: allows to determine oscillation mode from Duet, Modulator 1,2,3 (which are different nuances of Ring Modulator. (800dv owners will understand) and two noise types (Pink and White)

Bass sounds can be fat or sweet, leads are lush and unctuous, sin waves are sweet and the pink noise is superb. Plus a modulation and detune between both oscillators which provides an incredible natural chorus.

I’ve been extremely lucky to get this for FREE(!) and its bigger brother the Korg 800dv for 200 bucks a few months later – needless to say I’m more than happy with these little wonders.
I got both in terrible states, with nothing working.
But, and that’s where the magic operates, such devices are very easy to take apart and service by yourself, and they’re sturdy both in the inside and outside. All I needed to do was clean them up and, a miracle, they ended up singing like on their first day!
Since that day, I’ve been in love with old Korgs.
They’re stable and accurate, unlike some old Moogs you need to retune.

The most surprising is that while you could expect them to sound the same, they don’t! They feature the same electronics but not the same schematics, and I don’t get the same sounds from one or the other.
They perfectly complement each other.

The only thing I could reproach them is their lack of expressiveness – joysticks and aftertouch only arrived with the Sigma model.
Neither the 800dv or the 700 or 700s featured these.

If you’re handy, there’s a way out using a pitch bend wheel though, and I added one to my Mini 700s – without the switch I added on my 800dv. It’s a bit tricky to do though, and the bend effect is limited to a single tone.

Another thing you could IMO reproach this mini 700 is that I hate function buttons to be right under the keyboard. It’s clearly unpractical, so I redesigned ot for that reason – the keyboard is lowered and the front controls put above (it’s not easy to do, you need to set the electronic cards up inside and replace some cables which are originally too short).
All this comes with beautiful woodwork, giving allure to this keyboard. Included pictures show my Mini 700s before and after I customized it.

As a whole, it’s easy to transport, quick to set up, does not feature any control buttons on the up side, which can be a good thing and allows to put another synth above it, but also a bad thing as it’s not very practical for realtime sound modulation – plus, it sets the keyboard a little high when you put it above another synth, and it will often be the case with a mono synth. I personally use it alongside my Korg PE2000, both work great together.
What about a mini 700s lead solo with the right hand and pad chords on the PE2000 with the left hand? You need to try it to believe it!

A faithful friend I take both on stage and in the studio – and possibly one of the most interesting synths alongside its 800dv sibling.