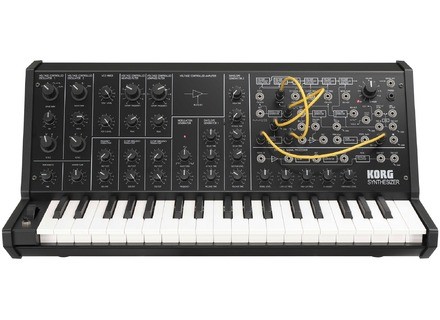 MS-20 Mini, Analog Synth from Korg in the MS series.

Buy this productView price information >
View other reviews for this product:
Revival of 1978 MS20 ...

The configuration is similar in all respects to the original model, but SMD and minijacks, progress requires ...

Very simple edition, which complicates a bit if "semi modular" dimension of beast is approached.

The sound is very close to the original MS20, I have too. That's right, it Drifte less, but it is a real success!


HOWEVER: some models are affected by the interest generated by the blast stage VAC / VCA envelope.

This is a serious problem and it is far from trivial given the number of people who complain ...

To realize this, you can see a small test that I posted here:

Soon bought, soon returned to its owner, not without having tried twice to have it repaired under warranty:

Two failures, and I did not get to exchange, so I've returned to regret the Afien who had sold me ... A guy's cool that I welcome the passage

What a pity! One could hope for a third of the price of vintage MS20, have almost the same sound with an easy to carry and reliable for many years machine is missed!

Korg hope that we would not try it out with their revival of the ODYSSEY! Unsuspecting friends!
See the source
Did you find this review helpful?yesno
Cookies help us improve performance, enhance user experience and deliver our services. By using our services, you agree to our use of cookies. Find out more.