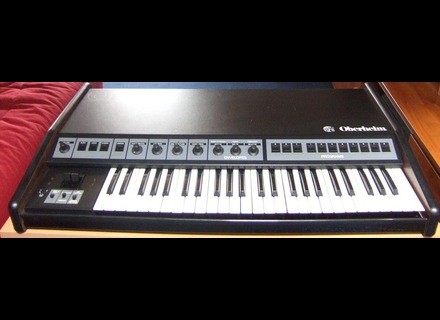 Synthtiseur preset analog technology which is similar to the OB-Xa (Curtis circuits), despite the misleading appearance of the OB-X.

My MODEL Has upgrad for 48 programs instead of 24 plants originally.

The OB-SX uses the same connectors as the OB-Xa than a monophonic audio output only and input / output CV / Gate. We gat.
The keyboard is also smaller.

Trs simple, no t to be programmed prvu but just to be prt of the use scne having CONTRL on the envelope and filter each sound.

It's the sound of the OB-Xa in a little warmer, fatter (who could believe it?).

I have not used much because it ncessite RVision a complte, several channels can not fit properly and an envelope filter appears damaged.
At worst if I do go out, I will serve as spares for my OB-Xa as it did not cost much.

That said if you are looking for the OB-Xa for cheap when you turn to the MODEL.
See the source
Did you find this review helpful?yesno
Cookies help us improve performance, enhance user experience and deliver our services. By using our services, you agree to our use of cookies. Find out more.