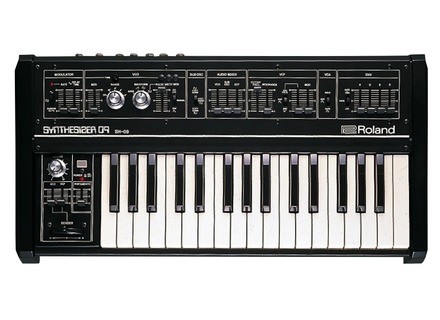 View other reviews for this product:
The SH-09 is a small mono has only one CSO Type SH-101.
It trs a solid contruction, a 24 dB low pass filter, an LFO, an envelope.
Level modulation, the filter can be modulated by envelope or LFO. Trs functional despite the poor performance.
Monaural. The real analogue.
A sub OSC with 3 waveforms, a CSO with saw, pulse, sine and PWM.

What could be easier? An 8 year old child can s'clater with.
The manual is available on the internet but not essential.

I put 9 because the sound of the HS-09 is truly authentic trs, trs vintage. In line with the whole series SH-05, SH-02, SH-07 or in the same Modular SERIES (except the SH-101 is so good that the cot). So pure vintage, with a Sub OSC more expressive than the SH-101. I find this synth blip for IDAL, poick small lead and bass classics. It has a nice grain and trs sounds bigger than the SH-101.
The fact that only have one CSO is not a handicap vritablement. Compared a plugin, the CSO is trs sounds really big and thick, it is far from what is obtained with a virtual instrument.
The Sub OSC is tudi to magnify the sound of a CSO, and sets sound almost as big as a Fatman.
In addition to the filter rsons a keytracking of thunder and a gnre sinusode is given so you can also use the sound as rsonance suplmentaire, which is not the case with most other analog synths.
So a lot of opportunity in the end.

Built like a Tank. And heavy metal, very solid. It is a good investment I think prfrer a SH-101 is more a fashionable but sounds worse.
It reminds be that the HS-101 t to be manufactured portable and inexpensive, which s'ignifie compromises on quality components, food ... The HS-09 is a version of the SH-101 without compromise.
The HS-09 filter is more powerful fatter and more enjoyable. As against it does not sound 'Acid' as her boyfriend. So to make the pure acid is the SH-101, to add sound to a vintage setup a basic plugins, the SH-09 will be effective and trs trs authentic. That may change compltement the sound of your songs.
See the source
Did you find this review helpful?yesno
Cookies help us improve performance, enhance user experience and deliver our services. By using our services, you agree to our use of cookies. Find out more.