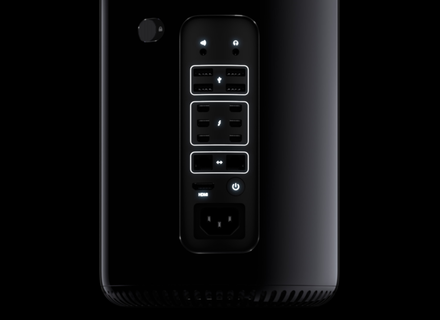 Apple held a keynote yesterday during which the team unveiled their new Mac Pro desktop computer with a radically new look.

After banning the Mac Pro from the European Union (see this news), Apple had to react quickly and reassure their european pro customers, which they did yesterday with the introduction of the new Mac Pro that will be available later this year.

The first major change in the Mac Pro desktop computer is its look, which is now an all-black cylindrical shape.

Inside the cylinder, Apple chose to install a 256-bit Intel Xeon E5 12-core processor, 1.8666MHz DDR3 RAM, and PCIe Flash cards for data storage. Graphic part includes two AMD FirePro GPU for connecting up to three 4K displays and an HDMI output. Regarding external connections, you get four USB 3.0 ports and 6 Lightning 2.0 ports. Two Ethernet ports, as well as WiFi and Bluetooth are also included, and the audio section features 1/8" input and output.

Apple did not communicate the release date nor the price of this new Mac Pro, which details are available at www.apple.com/mac-pro/.