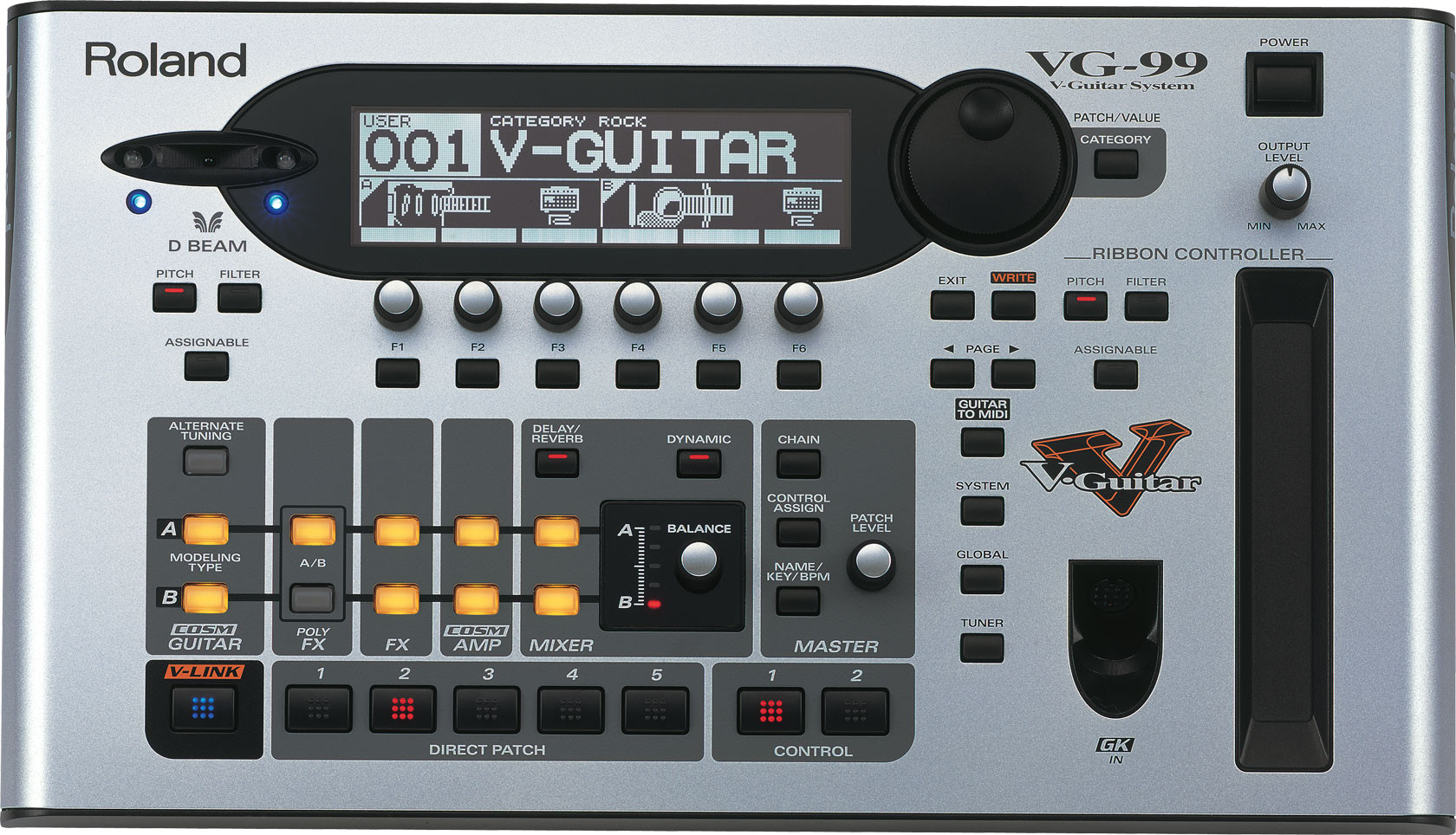 Audio/MIDI Converter from Roland belonging to the VG series.

Published on 03/15/12 at 19:26
Useless to return to the specifications. They are clearly listed on the official website ...
It may however be useful to recall that the VG-99 is a combination of several elements: a guitar modeler (Line 6 Variax way), a guitar synthesizer, an amp modeler, a multi-fx, a converter Guitar > MIDI audio interface on a USB port, a physical controller / MIDI.
Everything can be used with a conventional guitar, but it makes sense when it connects a guitar with a pickup kind GK3, GK2 or similar. Indeed, the use as "simple" multi-fx does nothing special, however, most other functions require a separate capture of each guitar string.

On paper, the VG-99 looks like being a condensed / Swiss knife rather promising and exciting, but as often with Roland / Boss, and for several years in practice, we always end up wondering if the ingestion of the brand are really aware of what needed by musicians and in the end we almost always ends up with a bike to the basic concept but interesting to see botches incomplete development or incomplete. The VG-99 is fortunately not a fiasco, but it is unfortunately not the bottom of things.

The general configuration >>>>> Is it easy?

When we already know what type of machine, it is rather the infancy of art. However, for those who have never laid hands on this type of machine, getting started can be a little harder.
What is certain is that the MIDI conversion functions and the modeling results of guitar / synth require adjustment of the parameters of GK more accurate. GK parameters of which I speak concerns the optimization of the instrument used on the VG. These are briefly set the sensitivity of each string, positioning the pickup, the statement of the pitch (length of the vibrating strings for which simply measure the distance Nut-12th fret and then multiply by 2) of guitar used, etc.. This is indeed the sensitive point if you want to get the most out of the machine. We must act patiently, and most importantly, with logic and insight. Once that chore negotiated, one can enter the heart of the matter and start planning our first sounds. For this, as often, no hope little plants that sounds, if they can possibly help them understand the possibilities of the LV (provided you have a FC300 since the real-time controls are generally programmed function of this bracket), but beyond that, we should not expect results sound unbelievable. I think the best is to start from scratch by resetting a patch and the building from A to Z.
The front panel controls remain relatively clear and, for the basic functions, you do not spend three hours looking for the button that goes. However, a lot of "little things" could greatly improve the phases of programming. For example, a detail, but when m ^ m, the CHAIN ​​menu that displays the chaining (order) effects it does not directly call the edit page of one or other known effects of requiring the user to first go through the main menu of this section. Tedious when a button could simply allow calling this page since the chaining.
I know, I&#39;m pinailleur, but my experience RolBoss products makes me think that at one time, the ingestion of the brand knew to think about all these details because the older machines often swarm of little things like that.
M ^ m of the way, one can appreciate the CATEGORY function is also present in many multi-fx brand, but in the m ^ m time, regret that this function does not allow the classification of a preset m ^ m in more than one of these categories. This is particularly unfortunate that the AG offers both conventional guitar sounds AND synth which can quickly bring a preset to be useful both in Funk Rock, or even cause it to be classified as in the category that Synth Lead Dubbing ...

Well, it does not alter the content of the machine, but given its relative complexity, it is typically the kind of thing that makes the difference with the competition. Now this is where the problem lies. Competition, RolBoss knows she does not really. Under these conditions, it is unclear what might encourage them to leave the ends of the digital foundation to innovate a little more. Those who know the series loopstation and know what the competition has in the past 20 years fully understand what I mean. But anyway, this is not the topic here ...

The format desk is not the most suitable for use on stage. I would have preferred a real pedalboard or rack size, but there is a little bastard and it did not m ^ m the advantage of being better suited to use studio / home studio since the machine remains relatively bulky on a desk. The tripod is an optional foutage mouth of both financial stability. A simple sheet metal panel does a better job for much less.
In short, we can ask the question this choice, but after all, why not ...

The manual is rather didactic, but unfortunately it lacks technical info <;

The sound quality is to consider first. Indeed, it is clear that the versatility of the LV is a separate tool, it can however be quite critical of the basic functions that together. Thus, in terms of modeling guitar, I must admit that I m ​​^ m from the world Variax, I&#39;m much happier with the VG99. I regret, however, again, some shortcomings.
1 ° The choice of modeled guitars is finally facing a very weak
Variax which offers much more. But is the quality over quantity.
2 ° The model VARI is the only model fully "customizable" shows some limitations ordnance by the Variax. Impossible, for example, to make a personal model in HSS config. Only two virtual microphones can be used. M ^ m in the vein, the choice of microphones is proving very stingy. Otherwise, we would have appreciated being able to customize a little rendering of each microphone.
3 ° acoustic side, again missing a few things that the model does not come close VARI.

Side multi-fx:
The intrinsic quality of the rest of Boss effects. We like it or not. THE problem is that m ^ m if you like the sound Boss, it is clear that certain effects, the VG99 is worse than its predecessors. I think of the reverb-starved life. Delays that do not m ^ m possibilities than a GT-Pro is more powerful in this respect. Some modulations also lack their targets. The Univibe example that seems softer on the GT-Pro. The phaser that lacks teeth but more importantly, quickly turns to vinegar in extreme settings. The chorus always typed 80&#39;s and, especially, always adding the invariable level without busting eardrums bearing means really the problem.

Side amp modeling:
Ink and COSM technology always dear to the brand and, unfortunately, still shows all its limits. If, in competition, it is often easy to get good sound, with RolBoss is still the problem m ^ m: Be very careful in setting sessions. A sound will indeed quickly turn to mush if we take notice. In the end, only experience will provide satisfactory sound. And when we find one, the challenge is not to lose it! on the other hand, when it is found that sound, then here you can quickly reach heights of enjoyment. It is certainly very far from the high-ranges like the Axe-FX, however, there is already enough to have fun.

Remains that the AG has a sound combination of power unattainable in competition without going through the combination of several machines. The all-in-One LV, if he has limits, also justifies the pleasure one derives. I&#39;m pretty happy with this machine m ^ m if I really regret that RolBoss falls asleep so deeply on his laurels.
00