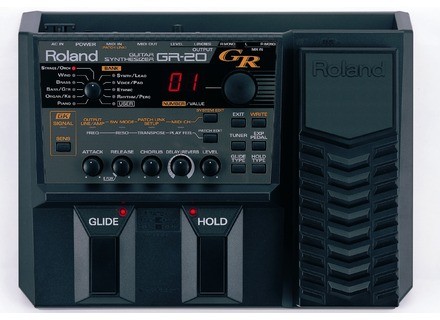 GR-20, Audio/MIDI Converter from Roland in the GR series.

Value For Money : Excellent
View other reviews for this product:
Then
here it is a reasonably priced package that includes the pedal and the sensor
found on the order of the sensor always two switches up / down or assignable functions, a knob worthy of the name, and + ieurs accessories to fix the sensor, even on a les paul style skyscraper
Crankset: 2 switches and sustain transposer or assignable functions, a pedal and the minimum edit the sounds directly, attack, release, dosage chorus, delay and reverb mix, depending on whether the patch contains or Mon lautre and patch level
+ Above, switches to the cutoff frequency, resonance, 2 -2 transposition and dynamics.
In summary, if you want to push away said dune pcm, fo go another model many German + expensive (Axon)
In any case here, the sounds are super quality dune frankly, and ds ttes families dinstrus: piano, organ, bass, gt, etc ... you will find something for everyone

Access to parameters of effects is super fast and easy
filters on the sounds st controllable by the pedal, some random st and frankly gives some great tips. To know that when you choose the "effect" for the assignment of the pedal, you accsa a parameter on the envelope of sound that nest inaccessible on the machine itself, so even more possibilities as you see.

the sensor: Roland tt simplify this machine until the internal multitimbral, head of the guitar's range does quune has its base, then as patches of sajoutent pcm Layes on this sound, we change doctave qd, EST well thought out. desfois can end up with strings, and plays lorsquon loctave upper sajoutent choruses that blend well all ds

ditto for families or ethnic percussions, the low E is launching a rhythm loop quon can sustain, while Quon plays the notes on the rest of the range.

To summarize, share and tones in this machine are similar to other guitars in pdalier synth, but when you find the same multitimbral.

but beware, qd You want to control an external sound module, multitimbral is present in the midi out! up to 6 stamps, Logik, by a rope with midi channels that must follow, eg, from 1 to 6 inclusive, or from 4 to 9.
There are four modes sustain: he who sustain a note and let ns take the other taking care not to replay the first, and 3 vs other combinations that allow a truly free choice according grde lambiance vs that want to apply

I qqs months from the User,

cest top sounds, superior in numbers and quality to GR33, the grip and the rest tt, ds lensemble frankly, it was worth the money, including sensor

javais essay models roland else, but for the quality and diversity of sounds, there's no pictures, even better qd EST

relative to models roland else, this is more quil:

upgrade to version 2 sen serve with LOW! via an additional menu
link function patch very practical and intuitive to call the patches ds lordre quon wants nimporte by external MIDI controller
SETTING resonance for all sounds
edition by faster pots are in direct faade
additional functions for the buttons S1 and S2 of the sensor: the two pedals used to increment or decrement the octave sounds, while at the same time having access to other controls (tuner, patch changes, control changes)
Two LEDs present on the two pedals, which hold that the flashing qd is pressed, hyper pratik
dexpression the pedal can be assigned to four cutoff frequency and therefore a hidden parameter deffet additional possibility to vary the sound!
the parameter "envelope follow" directly accessible via the release knob
Sounds more recent (series XV) was breathtaking
6 multitimbral voice to control what external expander nimporte
small, lightweight and super intuitive to conclude
Now, the reason I would add TFW rack yam in the ass, but in fact a good koi ...
See the source
Did you find this review helpful?yesno
Cookies help us improve performance, enhance user experience and deliver our services. By using our services, you agree to our use of cookies. Find out more.