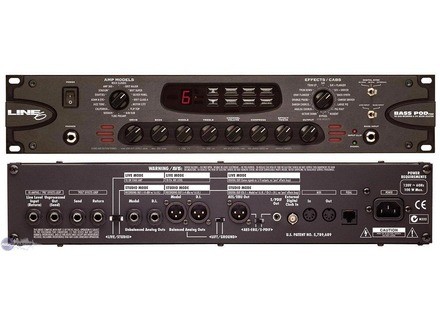 Value For Money : Excellent
View other reviews for this product:
It was available modlisations amp and effects of brands like Ampeg, Eden, Mesa / Boogie etc. For more information, go to the line6 site.
Everything is numrique.
Everything is ditable, and some controls are paramtres trs trs pousss and purposes. Possibility of publishing and load sounds via the line6 site.
The connection is complte trs: available to low prs everything possible jacks, XLR, MIDI, loops, effects and post eq pr, taken at pdalier line6 SPECIFICATIONS (enlarge the photo to see even you)
It is a 2U rackmount MODEL.

Gnrale configuration is very simple: you can just plug in the APRS dballage of the gear and sound will come out just by turning the knobs in faade. But this n'enlve not thorough study of the device and its rglages to find an original sound and convincing.
The edition of the sounds, the paramtrage amps or effects is quite simple, manual in hand. We just have to know what knob to turn to see what he does, and especially listen to what gives.
The manual is provided in English. It is available on the line6 in French and it is clear comprhensible trs.

First, the effects (on rotocontacteurs) are not chainable. One a time, and preset amp. Ralistes effects are, at least priori because I could never REALLY test the original versions. That is correct. Personally I have not bought this machine for the quality but for the effects of modlisations amps, and effects to introduce me, and there's plenty to do!
Then the amp modlisations ralistes are generally, but to be clear: it is not possible to have the sound of the amp which is multi but something approaching it much . There is no Mystra: This mule prampli amplifiers which are each 2 3 times more expensive!
The amps I have prfre simulation EDEN, AMPEG. The MESA is quite practitioner. I prfre effects are the compressor, distortion and fuzz, but also the volume and wah wah available on all presets (with pdalier adquate!) Not because these mod Lisati are ralistes (they stick the Ralite but they are not true) but because the sound j'apprcie obtained.
Finally, it is true that whatever you plug into this machine has almost sounds like (even on a preset): This POD does not transcribed Fidler timbre of an instrument, but still allows m I have some good sound musicos racks with more complete and complex can not have.

I have used for a year. Sold in June 2004 for a BASS POD XT PRO.
The particular feature I like most: AMPEG sound simultaneously, the wah wah (MIDI controlled by a FCB1010) that dclenche ds that I activate the expression pedals. I'm not a fan of this device but AMPEG rconcili me with it in when you plug an instrument into an AMPEG, sounded quite a lot better!
What I like least: the plthore formulations of amp and effects which I do not use because the resulting sound is bad my taste.
Essay I had nothing like this before.
The ratio quality price is right insofar as we see things the Manir following: what to say is that you can not have the sound of a MODEL amplifier is described in the instructions, but you can get sounds that we like.
APRs have tried the POD XT PRO (sold as there are few) I think this is POD PRO suprieur in terms of simplicity of rglages, Accessibility assistive technology software for sound and quality (see opinion on the XT PRO): some simulations sound better (I can not explain it). In short this machine suited me better, but it may be because I prfre spend more time playing than trying to sound out drinking a rack ...
I purchased a guitar line6 dmonstrateur that it never used silent. I sold it and I regret having changed to a POD XT PRO for the reasons mentioned above. Now that I know what I want in terms of pramp and effects, I do not know if I would do this purchase, but I do not regret it because with this gear I refined my needs and my sound .
See the source
Did you find this review helpful?yesno
Cookies help us improve performance, enhance user experience and deliver our services. By using our services, you agree to our use of cookies. Find out more.