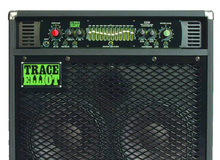 How To Set a Bass Amp

It's almost that time of year again and my body and mind are already longing for some well-deserved holidays sitting next to the fire with a hot cup of chocolate. But before that happens and we can all go enjoy ourselves, I will close my short tutorial series.

OK, so now you already know how to set the controls of your bass guitar (refer to this article for passive basses and to this one for active basses), now we will deal with the subtleties that make your amp sound right.

Let's dive straight into the subject by starting off with the first step to achieve a good setting: adjusting the amp's gain and the output volume (which, as we will see later, will need to be readjusted in the end). As you could read in the previous guide, if your amp features gain and volume (also called Master) controls, you can boost the attack of your instrument. 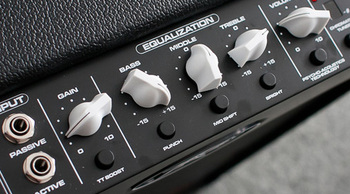 The Gain control regulates the output level of the preamp and then the Master control defines the power amp's output volume. Thus, it is necessary to give your instrument the right gain before determining the final volume. This will allow you to go from a discreet and clean sound to a more biting and even screaming or raging sound (for distortion fans).

So what we need to do in this first stage is find a balance between the overall volume and input gain.

— For a clean sound, the rule is very simple: the Master ought to prevail over the gain.

— To get a biting sound: the gain must keep up with the Master's level or even surpass it. Play with this idea and you will quickly learn how to get the most out of it. A biting sound can fit a lot of styles and, if your amp allows it, it's a sound color that you have readily available without the need of investing on a pedal.

— To get more or less distortion: push the Gain above the Master, exceeding it more or less depending on your mood, but most of all on the songs you are going to play.

Note: the gain setting will affect the EQ and certain harmonics.

— Setting the gain will depend on the way you play, as well as on the instrument and the amp you use.

— Certain brands offer some sort of indicators to facilitate the adjustment task, nevertheless, your ears remain your best allies to get the best results.

— Not all amps are made to be distorted.

— Set your volumes with caution and always check the position of the Master before playing a single note. A heart might be fragile but the eardrums are even more fragile!

Once the level of your signal has been adjusted, let's sculpt it a bit. But rather than reforming an existing signal (remember, you have already spent quite some time adjusting the knobs on your bass) we will just make it fitting (according to the playing style) and enhance it in context. 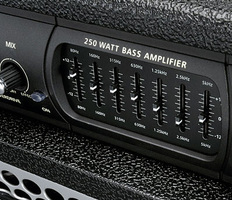 You always have to take into consideration the sound of your instrument when EQing. You want to avoid making superfluous adjustments with the amp's EQ or set it in a way that is the exact opposite of the settings on your dear bass. Rather than giving you some sort of presets (which will never sound the same with different basses and amps), I will tell you what the function of each of the EQ's frequency bands is. Let me remind everyone that most amps feature EQs that simply boost or cut frequencies. In plain English, what that means is that the correction doesn't go from zero to the maximum, but rather from negative to positive values (where zero corresponds to the center of the travel). If you go below zero you cut frequencies and if you go above you boost the signal.

My tips on setting an EQ:

— For me, the equalizer is the means to fill certain voids specific to the instrument we use or the way we play. So it is necessary to know our own instrument very well and put our personal way of playing into perspective to fill in the frequencies we lack and cut the ones that seem to be over the top. Play the moderation card when you turn your amp's knobs, enhance your sound, don't overdo nor underdo it. Balance is the keyword.

— When you play with an amp for the first time, I recommend you to test every band independently, by putting the others to zero, in order to familiarize yourself with the particularities of the amp. Start from the lowest value while playing an open D or G and then turn the knob all the way around so you can listen to what it does to the signal. Then do the same with the second and third bands. It will be easier to EQ afterwards.

— Avoid clichés: you will not sound like your colleague just because you set your amp just like his! We do music, not chemistry. There's no miraculous formula, only the work you do with your ears and your ability to understand the sound you hear. Learn how to recreate it according to your own gear and the way you play. It's certainly more tedious that simply copying our neighbor but it will make a better musician out of you. Every musician has his own way of understanding and playing music and I believe a good EQ should also highlight this individualities. And don't forget that nothing stops you from going off the beaten track even if you play a particular music style. Playing reggae doesn't necessarily mean you have to have a soft and round sound, nor playing rock means you have to crank up all the knobs…

— Avoid making drastic cuts to one of the bands. In music, as in politics, extremes aren't very effective. There's nothing worst than having a very dull or brilliant sound, and both these evils are generally rooted in bad amp settings, sometimes combined with a lousy sound shaping.

— Always consider the opinions and the sound of the rest of your band mates: your signal ought to come through without obfuscating the rest of the instruments nor clashing with them in terms of frequency. We often share the same frequencies with guitarists, certain electric pianos (like the Rhodes) and other instruments that use the same frequency ranges as the bass.

— The Boost and Cut supplementary filters ought to be used sparingly: I personally don't use them at all. Even if they might come in handy as a last minute resource, they will always be less accurate than a good old pot or a graphic EQ. At worst you can use them to gain some time, if for whatever reason you must boost certain frequencies of your signal, but at best you should avoid them, because their effect is usually very extreme.

— Always take into consideration the acoustic particularities of your environment: the venue where you play, its floor covering, the walls, and the amount of people are all factors that will force you to retouch your settings.

Readjust your overall volume and… 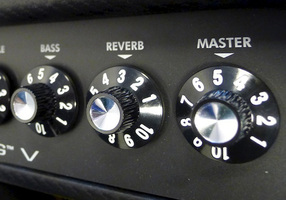 You are ready! Since the gain level increased a bit due to the changes we applied to the different frequency bands, it is necessary to adjust the output level according to it, but also in relation to the rest of the band. In order to do that, start on the basis that we always hear too much bass and moderate your signal accordingly. I always play too loud, but that's because I'm a bit deaf! Work intelligently (if that is possible) with the sound engineer (if there is one). Consider that he is the one who controls your sound coming out of the PA and, at the end of the day, what the public hears depends on him, so pay attention to what he does. Find a balance to get a sound that pleases you and, especially, that pleases other people. Never forget that we play for them too!