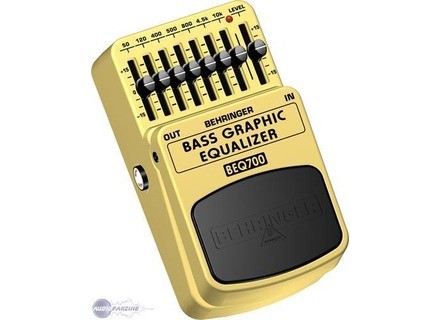 Buy this productView price information >
View other reviews for this product:
I am very disappointed by this pedal ... In reality I have not even had time to play once with, as jacks (in out) are so fragile as mine was, however, that in a Rockcase was a fake instant contact .. Here's a shot I have been buying boss .. I wanted to realize and it's done .. I think the case is really too fragile to make the scene ..

Not need a manual for a pedal to equalizer .. For the rest so it's going because it's a simple pedal and the design is very inspired by boss (see Carr Plagge). The cursor was when they really are not very robust if not downright frail .. And quality as to say that within a few months of crunches will appear if you change the cursor position ..

In addition, I compared the sound with a good boss and I think this is not the same thing especially acute (the Behring) which adds enormously to breath .. I have 4 other effects connected before when I triggers in addition to the equalizer I sound radio set wrong with the boss then nothing ..

Here is the conclusion for me this pedal is at its price it is addressed to people who really want to try or do not use it much .. Moreover Behringer does not claim to more .. After effects if you like we'll have to save to buy you the real ... Finally I think it could have gone up making copying the power supply because there it is really misplaced ..
See the source
Did you find this review helpful?yesno
Cookies help us improve performance, enhance user experience and deliver our services. By using our services, you agree to our use of cookies. Find out more.