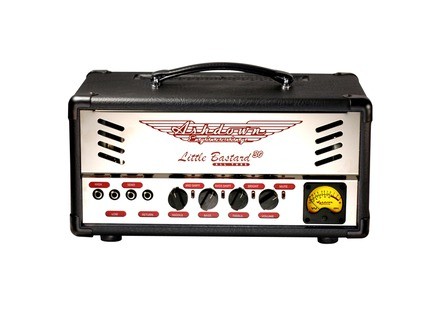 View other reviews for this product:
This is an amp all-tube 30 Watts power that delivers all-in-fact for competitive transistor 100 Watts. Proof is that even in concert (small rooms) I never pushes the volume beyond half!
It has 2 input jacks (active / passive), an effects loop in jack, two jack outputs for speaker in (8 and 4 ohms) and an XLR DI output. The latter recovers its position "Pre" (before EQ and effects loop) and unfortunately can not be switched to "Post" (after all that). In addition, this output is set to a particularly high noise level.
The settings are both simple and effective:
- 1 volume knob with a switch Mute
- 3 Equalizer knobs whose order is a bit surprising but which one gets used quickly: Middle, Bass, Treble
- 1 equalizer on each switch to determine which portion of the frequency knob will act
No built-in effects, but the loop can add whatever you want. Personally, I play no effect for now. Later maybe, but that's another story ...

Configuration, as shown above, could not be more simple: 3-band EQ with frequency switches to refine. Not really need manual once, unless you want to know what technically modify the switches ...
Getting a good sound I was taken little time. A snooze or two and presto! I did not touch anything, and I sound I like: D
That said, it is true that I happened to connect to another speaker than mine, and suddenly rendered clearly was not the same (FYI, my cabinet is a Ashdown VS 212-200) .
My only small complaint - which is probably more the way I connect -: DI output makes the sound too powerful for connection to mixing desk ... Finally, it seems. I tried once, and the sound engineer was not famous, so the problem may be there ...

The Little Bastard is exactly the amp I was hoping to find.
Playing rock punk-grunge trend or slightly metallizing, I wanted an amp that gives me a little saturation snapping while delivering low frequencies present. And here I am ready!
After some testing settings, as I said earlier, I quickly found THE sound I was looking for.
Admittedly, my method is perhaps not very academic, but here it is:

I play on an Ibanez SR505-BM. It is a 5-string bass active, I plugged into the passive input of the amp. My bass also has one 3-band EQ on which I push the medium thoroughly switches on the high range (bass and treble remain in the middle). On the amp, I get the mediums and treble at 2:00 and goes low at 10 hours.
Result: see above.
Plugging bass active passive input gives this small saturation that is so sweet to my ears ... But I also think it is the problem of volume delivered by the output ID.

I bought this amp last spring, after trying a few other models, including a Fender Bassman TV Fifteen or modeling amp (TC Electronix) I do not remember the model. The Fender I really liked, but the EQ settings were too soft, and the sound was issued may be very pretty, it sounded too round for my style of play ... TC Electronix hum ... In short, 2 minute test and I knew it was out of the question!
Since its purchase, I can not do without my little bastard: to snooze in concert, and even at home (well, I stopped after a few complaints from neighbors), I'm a fan of his report.
Difficult to say what I love the most ... No doubt this small natural saturation generated by connecting an active low input passive.
What I like least: the absence of switch Pre / Post on the DI output.
I bought this head with a body in Ashdown 2x12 for a total price of about 1,000 euros (about 100 €, I do not remember exactly), and honestly, I think the price / quality ratio very correct. I wanted to treat myself with a tube amp, and yes, I am well pleased. My ears do not swear by it, and my guitar is almost jealous!
Without hesitation, you guessed it, I would do this choice with closed eyes and ears wide open!
See the source
Did you find this review helpful?yesno
Cookies help us improve performance, enhance user experience and deliver our services. By using our services, you agree to our use of cookies. Find out more.