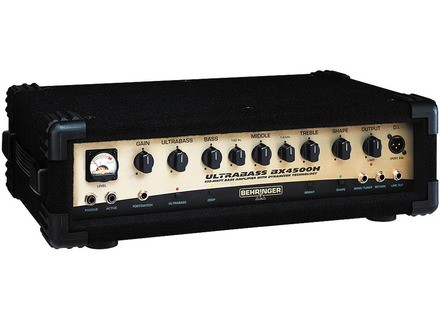 View other reviews for this product:
I had this thing 6 months, it's downright wrong level and its power.
Supposedly 450w, you laugh, on the same tower (hugheskettner115 410) a 200 watt Fender KXR sounded louder and mostly clear and distinct.
Octaver embedded nice, and the amp can run on 2ohm without damage (according to product manager germany in 2005).
Equalizer draft, still better than nothing, although I have not tested external preamp straight into the back loop.
No noise when you play it, it's something.

It's simple, and it never gets a good sound!
I totally thought my tour was lame ...
On a small 12-inch largebande to play softly with the octave was almost acceptable ...

It is confusing, as coming from the depths of the cellar, zero dynamics, definition absent, difficult to hear what we do really with this amp.
In addition, it sounds so Raplapla that mounts the volume in the hope that something happens and then what happens is ... a limiter that sets off alone. Which suits the situation of course! Like what it could sound even less ...

I regret not being able to try a SansAmp bass right in the return loop, which would have allowed us to identify the culprit (preamp or amp total).
I have the distinct impression that nothing would do, hopeless cases.

Terrible! Complete lie, too expensive for the crap that is (still reliable after various forums), especially not only buy this amp.
I think a SansAmp amp plus a sound system (it can be found for less beefy 200euros) is a better investment, for a price and an equal weight.
The only consolation, through the din of its product descriptions Bebert I easily sold my amp. PHEW!
Marshall MB30 has a sound quality that will never Bébert. And you can even a driver amplifier with sound, by the way! That's my advice for cheap, and left the tower and the amp sound to local while MB30 made the round trip with the bass at home, versatile and always better than Bebert. Porcaro from Toto made this plan with a SansAmp elsewhere, and I never found it lacking in its ...
See the source
Did you find this review helpful?yesno
Cookies help us improve performance, enhance user experience and deliver our services. By using our services, you agree to our use of cookies. Find out more.