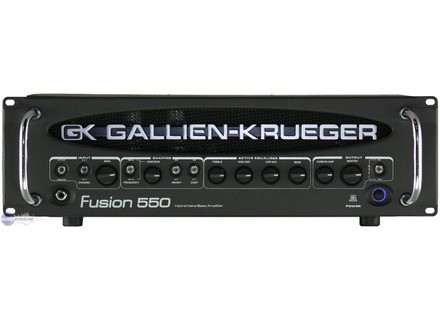 Gallien-Krueger introduces its first bass head featuring an all tube preamp, the Fusion 550.

According to the manufacturer, the Fusion 550 bass head incorporates a uniquely designed six stage tube preamp paired with a 500 watt version of the high-current solid state power amp used in the brand's 1001RB-II, all in order to provide a sound that melts the rich warmth of tubes with the quick, punchy power that characterizes GK bass amps. This model also incorporates motorized knobs which allow to store two different settings, thus giving the user the ability to dial in a separate overdriven or slap tone and footswitch between them.

The Fusion 550 also features a simplified version of GK's exclusive 50 watt Horn Bi-Amp System which allows to keep the ratio between the woofer and tweeter. Other features include tube driven four band active EQ and voicing filters with a frequency select for the contour control. The rear panel features Neutrik Speakon and ¼" speaker output jacks, effects loop, tuner out, and a footswitch input jack. Also on the rear panel is a DI output which uses an isolated transformer for ultra-quiet operation.

Gallien-Krueger's Fusion 550 is already available, although no MSRP was communicated.