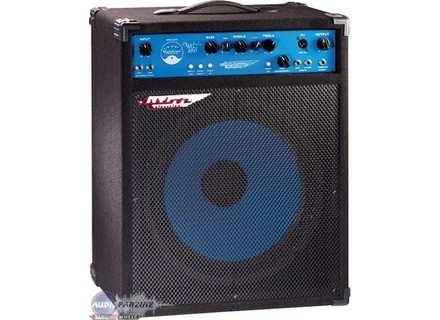 View other reviews for this product:
The Ashdown Electric Blue 15-180 is a bass guitar combo amp suitable for uses of all types. I've only used this amplifier in the studio when the bass player of a band I was recording brought it in for the session. Ashdown is a cool company as they make some great bass amps for reasonable prices. The 15-180, somewhat obviously, boasts 180 watts of power through a single 15" speaker. It's a solid state amp and gives you a plethora of connections and routing options to work with including both an active and passive 1/4" input, 1/4" tuner output, 1/4" effects send and return, and also an XLR output for taking the amp direct out.

Using the Ashdown Electric Blue 15-180 isn't too hard and at the same time there is a lot of parameters and controls to work with. This includes built in compression, input and output levelers, and a three band EQ. It also has a bright switch and a sub harmonic knob that can produce some interesting full sounds. I haven't seen a manual for this and I don't think I ever will.

The sound of the Ashdown Electric Blue 15-180 is pretty awesome. It's super full sounding and between all of the controls you can definitely get a wide array of tones. It's pretty big and should be loud enough to play shows with in a variety of venues. When recording it I took both a signal from XLR output and mic'd it up, both of which gave us some great sounds - especially the DI sound which was awesome coming straight from amp.

The Ashdown Electric Blue 15-180 is a superb choice for bass players on all levels who are looking for a great bass combo amp without spending too much money. I really like the sound of the amp and also love that you've got so much control - built in compression is a huge plus! I was surprised to find out how cheap these are. Those bass players out there looking for a top quality combo amp without the budget for one should definitely check out the Electric Blue 15-180 and the other amps Ashdown has to offer.
Did you find this review helpful?yesno
Cookies help us improve performance, enhance user experience and deliver our services. By using our services, you agree to our use of cookies. Find out more.