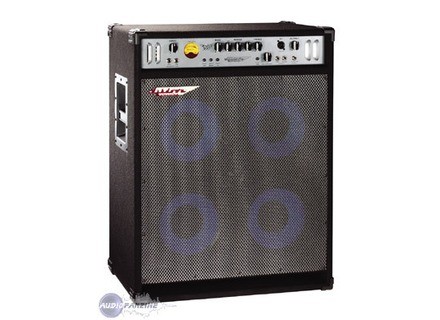 View other reviews for this product:
I have played bass for 20 years and a good 15 of that has been searching for the perfect amp. About 2 years ago i found it, Ashdowns Mag 300c 410t. Rated at 307 watts ( with optional ext. cab) this thing rocks! I found it easy to drop my ss Ampeg as soon as i gigged with it. For around 700 bucks it is the complete package. It handles my 5 string easily no matter what type of music.

I bought this amp as a backup to an Ampeg B3, when i needed more volume on stage. Even without an extension cab it blew the b3 away! Rated at almost 50 watts less i still had to run the output at @ 10% all nite, now its all I use, the Mag 300 will give you 307 watts with an extension cabinet, but i have never needed it. Tone drips from the beautiful 10 inch blue line drivers (4) and is easily sculpted with the 5 band eq and onboard sub harmonic generator, even though the latter is more pronounced either with an ext. or in the mains via the xlr direct out. Deep, bright, and eq switches do exactly what they say. The only surprise with this amp is the capability of it.

This amp is built like a tank. Would have prefered a tougher covering but thats just personal opinion. Not to mention it looks damn sexy with the glowing input vu meter and blue speakers.

This thing is heavy. I guess thats the price of the solidity of the cab. Carpet covering is as easily torn as any other amp. In my opinion could benefit from sone tolex or somethin.

Built in China apparently by the same guys who built the wall. Built well i havent had any problems at all.

For the money, hell for twice the money, this rig is hard to beat. It does what ever you want it to.