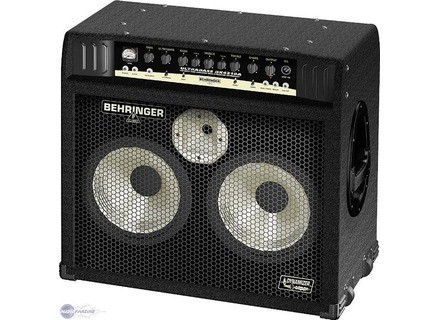 View other reviews for this product:
I'm a bass guitarist and have been for 17 years or so. I sing a bit as well, and dabble in rhythm guitar occasionally. I play in a classic rock band, Sore Point, who gig fairly regularly in the local area and are well regarded on the circuit. My heroes are John Deacon (Queen), Pete Trewavas (Marillion), Steve Harris (Iron Maiden), Geddy Lee (Rush) and I tend to listen to good rock music from the 70s onwards

About £300 new from www.dolphinmusic.co.uk
Rather than put my BX1200 through the band PA and carry huge bass bins everywhere, I wanted something that would serve as backline and FOH sound at the same time.

For a 450w combo, this was at the cheaper end of the market (always a bonus!) and, as with the BX1200, offered a lot for the money. The controls are pretty intuitive, passive/active inputs with a cool 'vintage' meter for gain adjustment, 5-band rotary controls for EQ, 'Shape' control for a 2nd channel for solos, change of sound etc, 'Ultrabass' octaver control, master volume...
There is a post-EQ DI output on the front, ideal for providing a sound engineer with your bass sound, not his, plus FX send/return . The back of the amp is also simple and straightforward, with two 1/4" jack outputs and a single speakon connection, kettle-lead power socket and on/off switch. This is pretty much a bigger version of what I was already using and there was no real need to fiddle about to get the sound I wanted.
There are 'bright' and 'deep' switches on the front of the amp, I tend not to use these and rely on the EQ.
A footswitch is included for the 'Shape' and 'Ultrabass' options so switching between or during songs is made easy, with a light on the amp to indicate when either function is 'in'.
Another selling point for me was the spec on the speakers - 2x10" aluminium coned drivers plus a tweeter. I have a fair amount of attack in my sound so this sounded ideal - but more on this later!
For me it was a nice compromise between size, output, cost and familiarity - I was never going to pick up a Trace Elliot at this price and it seemed an ideal 'big brother' to my BX1200.
It's plenty loud enough to use un-miked or DI'd in most of the venues I play, and in fact rarely gets pushed over about 60%. Nice to have that headroom though. The sound is clear and never comes close to breaking up.

This amounts to a love/hate thing. The amp itself is great - it's available as a head by itself and I wish I'd gone down that route in retrospect.
The 'cab' part has caused me a lot of grief and it took me a while to work out why. Initially I found the aluminium speaker cones a little harsh, but some EQing seemed to sort matters out. I then found that the left-hand cone had parted from the fabric surround, possibly due to a small dent in the cone. I was send a replacement by Dolphin and, prior to fitting it, ran a line of superglue around the join, just to be on the safe side. Having used the amp a few more times, the replacement cone shattered around the edges. I decided that the drivers weren't up to scratch and replaced them with Eminence Gammas. To my surprise, when I rewired the unit, one of the outputs had been driving both 10" speakers in series with the other output direct to the tweeter. The driver that blew was the first in line.
I've since rewired both speakers and taken the tweeter out of the circuit altogether. I was not impressed...
There is no crossover between the bass drivers and the tweeter anyway, so quite what was meant to be happening in there I really don't know.

The other minor quibble is that the unit is unbalanced when lifting, especially when there are 2 of you lifting it.

The unit itself is rugged and well built. It's heavy, but that's to be expected. It has handles on either side and a set of wheels at one end. I'm convinced the amp is a little bigger than advertised but still not outrageously huge. I can lift it myself as long as I'm not carrying it too far, and it fits in the car easily enough.
There is the usual grille across the front and the controls are recessed far enough back not to get knocked about. Access to the front and rear of the amp is easy enough and when playing, anything you may need to adjust is on the front and readily accessible. The footswitch is also a rugged thing, nice to have it included rather than an additional extra.
As for the rest of it - a large, carpet-covered chipboard box! Nothing else to say!

Now I've fiddled with it, I'm happy with this amp and will continue to use it. It was a logical step up from the BX1200 and as far as the amp itself goes, I'm more than happy.
The big disappointment has obviously been with the speakers. Incorrect wiring left me putting 225w through two 10" drivers in series and the other 225w through a tweeter(!). Since the warranty had expired by the time I realised what had happened, I had to spend more money on a pair of high quality drivers and get the soldering iron out to correct the error.
Correctly wired I suspect I would have had no problems whatsoever with this amp and still be using it with stock parts. Unfortunately this has shaken my faith in the usually reliable Behringer and, while I would be happy to recommend the 450w head, I'd steer clear of the combo option and buy a seperate cab if I were you.
I've scored it as a 3 overall because I now have what I wanted. Pity I had to change so much to get it...