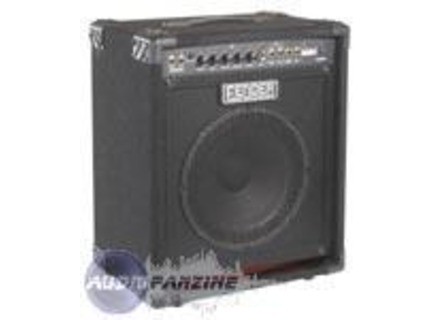 View other reviews for this product:
This amp is 60 watts with two input transistor, a passive and active, there is a mid scoop button, a volume control, a bass, one treble, one high and one low mid, a headphone jack, a line-out and that sends two input and feedback effects. LED light below the amp depending on the intensity of the games (flashy, but it is pretty useless)

It's a pretty simple amp to pick up, the configuration is pretty basic, you get a good sound easily.

It's a Fender amp with a fender and you can hear the sound is fat and heavy and easily adapts to different styles of music but I do not recommend it for those who use the hugely slap in their games.

it's been two years since I use both to repeat that for the concert (good through the amplification of sound engineers are miracles), but to use only 60 watts it's just me too 100 watts recommended rather for those who do small concerts and want to be heard.
this is my first amp and I do not regret my purchase but by growing together I had to part with it to buy something bigger (amp head and cabinet Hartke)
but very well suited to beginners and intermediate who want to have fun with a fender well from home.
rappport the money and correct even if the diodes n'on no utility except to raise the price (it's still nice though)
See the source
Did you find this review helpful?yesno
Cookies help us improve performance, enhance user experience and deliver our services. By using our services, you agree to our use of cookies. Find out more.