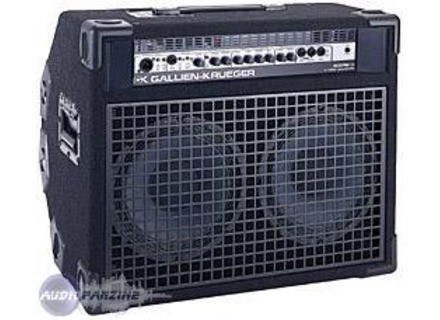 The Gallien Krueger 400RB 210 is a bass guitar combo amp that is suitable for live shows or use in the studio. I've only used the amp in a studio setting, but it seems to me that this amp would be best suited for live shows considering it's size and that fact that it is a combo amp. The amp has an XLR direct out, as well as 1/4" connections for input, a tuner, and send and return connections as well, so this is a pretty complete amp in terms of flexibility. It's got 150 watts of power.

Using the Gallien Krueger 400RB 210 isn't as simple as using an amp with less features, but I'll take the extra features any day. It's easy enough to figure out how to use everything, as I don't think I ever felt lost while using it. The parameters that the amp has to work with include knobs for contour, presence, treble, hi-mid, hi-low, bass, and lastly boost and master under the overall output section. Even though there is a good amount going on both in terms of connections and control, it's all explained in detail in the manual if you feel that you need some extra help.

The Gallien Krueger 400RB 210 straight up has a great sound to it. There is a ton of control over this sound as well, making the possibilities very flexible. I've used the amp in the recording studio with a Fender Jazz Bass, where we definitely got an impressive and full bodied bass guitar sound. We also took a direct signal and later on blended the two. While it's easy to get a good sound from the 400RB just by plugging into it, I think where this amp makes it's money is really in it's configuration and flexibility.

For those bass players who want something that is versatile and flexible, but sounds great across the board, you've come to the right place with the Gallien Krueger 400RB 210 combo amplifier. I believe that they make just a head version of this amp as well, which I would imagine is exactly the same, just without the speakers. While I haven't used this amp for live shows myself, judging from the make up and overall sound it's definitely a viable option for shows if you don't mind carrying this around to gigs. Gallien Krueger has an impressive line of amps that are absolutely worth checking out for bass players, and the 400RB is not exception.
Did you find this review helpful?yesno
Cookies help us improve performance, enhance user experience and deliver our services. By using our services, you agree to our use of cookies. Find out more.