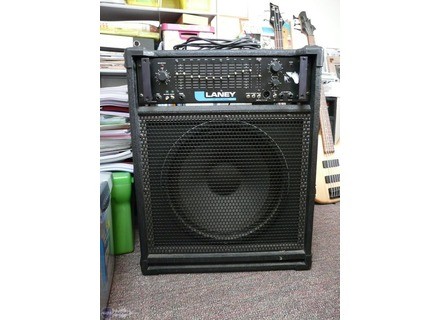 View other reviews for this product:
100w into 8ohm

easy to use..as it should be...still suits my needs as it retired to a practice amp

musicman stingray, warwick thumb nt5. aria avb nt5...i only use it as a practice/house amp these days..

have gigged with it recorded with it and after 23 years the only thing that ever happened to it in all the years is a blown fuse... never ever failed me...i have had many many amps over the years, i use a mesa 400+ with trace cabs ,and also have a trace quatra. but the laney still gets used every day,and for the money,best thing i ever bought in my musical life. its still easy good enough to do smaller gigs with if needed...not a fan of 15s but the dp100 is tight and does the job at lower volumes,cant handle the 5s when louder,but i started out with it still use it 23 years later,cant say fairer than that,its heavy by todays standards,never found a reason to change it,would i buy another ,yes i would...any amp thats been bashed banged,dropped, and dragged in and out of vans for years and still works as well as the day i bought it gets my vote...had various ampegs that could not handle the life. laney dp100 .bought it new,still use it .great great amp that i will never sell...end of story.
Did you find this review helpful?yesno