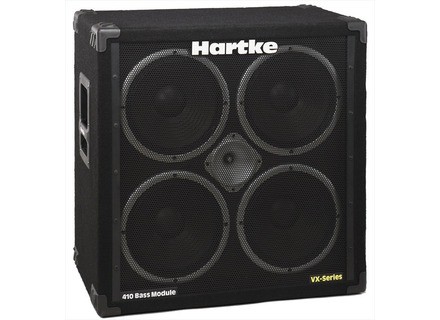 VX410, Bass Guitar Speaker from Hartke in the VX series.

View other reviews for this product:
Well then, it has the classic HP 4x10 cardboard seen by Hartke. It's good big cash 400 Watts into 8 ohms. I use it with the HA3500 head and I can tell you that the power is with go, this couple is more than enough in RPET and even live or can be added a small 15 " to toy. This little box also features a tweeter it to improve in the rponse Aiges. At the rear is simple: one that is connected between the amplifier output and an output for a small ERRF. All this is carefully enclosed in a box very tough marine plywood and equipped with two grips transport well when it is cool to wear 31kg of bte. The overlying carpet is nice but lacks the "feeling" to the touch.

This cabinet is versatile rvle trs, fairly neutral (leaving the possibility to change their sound without pcher) and it responds flawlessly in all frquences without saturating (part if pushed background we feel a big attack on grsillement). It is super versatile, all types of game switches ease, and consquent could miss a small lack of personality. It is dynamic and trs trs is a good choice for those who want the good stuff.

I have been using for over a year and I love it, if it was redone, I Achteras ten with five heads HA3500 so it's good because for the price or the small stuff is sold, you could always search, you will not find better. Cheap, an exellent quality both in sound and reliability at the level trs dynamics, without relying on the power, this box is exactly what I needed and I'm really happy with his work!
See the source
Did you find this review helpful?yesno
Cookies help us improve performance, enhance user experience and deliver our services. By using our services, you agree to our use of cookies. Find out more.